Lebanon still without president after the 37th election session

The Lebanese parliament failed again today and for the 37th time in a row to elect a president to replace Michel Suleiman whose term ended on May 25 , 2014.

He said: “If we elected Aoun as president, would the parliament then become legitimate?” 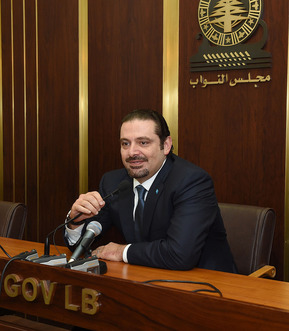 Hariri , who endorsed Franjieh’s nomination in  late 2015  added after the failed electoral session .

“With all due respect to Aoun, this is a legitimate parliament.”

Asked by reporters to comment on Franjieh’s absence from Wednesday’s round of polls, Hariri replied: “Franjieh is the master of his own fate and it is up to him to decide to take part in the elections or not.”

He voiced his optimism however that the presidential impasse will be resolved, while blaming those who are obstructing the polls “for all the wrongs in the country.”

Overcoming the vacuum that started in 2014 with the end of the term of President Michel Suleiman is key to resolving the crisis in Lebanon, asserted Hariri, echoing similar statements made repeatedly by Berri.

“We will continue to head to the  parliament to perform our constitutional duty,” Hariri vowed .

Hezbollah announced that it will continue to boycott the polls until it has guarantees that its candidate, Aoun, will be elected president.

Aoun said last week that the parliament whose term is extended lacks the legitimacy to elect a “legitimate president.”