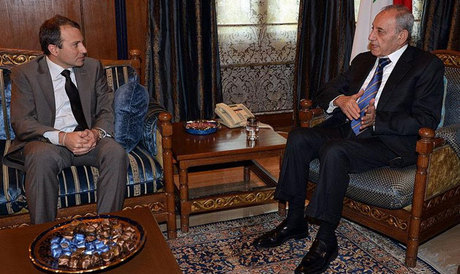 “We are witnessing a breakthrough, which we hope will speed up the election of a president and we hope our allies will support us.”

“We hope that all sides will take advantage of this breakthrough,” he told reporters .

“The nomination will help us resolve disputes,” hoped the Foreign  minister.

But Berri has  reportedly stressed that he backed the candidacy of Marada Movement chief MP Suleiman Franjieh despite the Lebanese Forces endorsement of  Aoun for the presidency, al-Akhbar daily reported Tuesday.

Sources close to Berri told the newspaper that the speaker will not announce his official stance before carefully studying the latest deal struck between LF chief Samir Geagea and Aoun.

On Monday, Geagea endorsed Aoun’s candidacy  in an attempt to close Christian ranks and resolve the country’s 20-month political deadlock.

Lebanon has been without a president since the term of Michel Suleiman ended in May 2014.

The sources said that Berri backs Franjieh and that his ally Hezbollah would not change his stance.

The speaker said last week that he gave the MPs of his bloc the freedom to chose the candidate they wanted if Geagea backed Aoun and former PM and Future Movement chief Saad Hariri continued to back Marada leader MP Suleiman Franjieh.