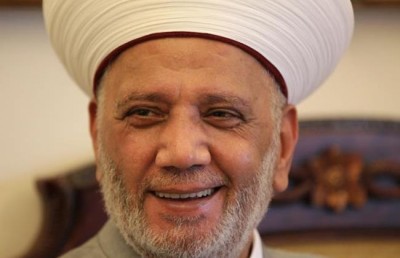 Sheikh Abdel-Latif Deryan was unanimously elected by the Higher Islamic Council as the new Grand Mufti of the Lebanese Republic after an agreement was reached Thursday that ended a 3-year-old dispute between Grand Mufti Sheikh Mohammad Rashid Qabbani and the Future Movement.

Under the deal brokered by Egypt and backed by Saudi Arabia, consensus was achieved between March 8 and March 14 Sunni politicians on backing Derian, who currently heads the Higher Sunni Religious Court.

Deryan held several religious posts, including secretary-general of Dar al-Fatwa, during the term of Grand Mufti Sheikh Hassan Khaled, director of Grand Mufti Mohammad Rashid Qabbani’s office, and director of the Association of Social Services, part of Dr. Mohammed Khaled Social Foundation. Deryan served as the acting director of Islamic Endowments and as an adviser at the Higher Sunni Religious Court before becoming its chief. He taught Islamic Shariah at the Beirut Arab University’s faculty of law and at the Institute of Islamic Studies, which belongs to Al-Makassed Islamic Charitable Association. He is reportedly the author of several books on Islam.

“What happened today is an expression of the strong will of all Muslims in Lebanon, to face the problems and reiterate the role of Dar al-Fatwa,” Daryan said in his speech after the results were announced.

After the election Hariri invited the electoral crowd to a lunch in the new mufti’s honor at his Downtown residence in Beirut.

He made a speech in which he congratulated Daryan for his election, saying “it is a blessed day, in which we are gathering united as Muslims in Lebanon.”

Hariri’s speech was centered on the need to fight extremism, which he warned was destroying the image of Islam and Muslims.

Hariri called on the new mufti to allocate all Dar al Fatwa’’s efforts “to safe-guard the Muslim unity and enhance coexistence in Lebanon.”

“Dar al-Fatwa’s responsibility in this phase of the nation’s life is a great one, one that does not accept any hesitation or reluctance in fighting extremism,” Hariri said and added : “We will not accept that a few extremists drive Muslims and Islam to a confrontation with their partners in the country and the nation.”

On his part Daryan hailed the Saudi king’s initiative to donate $1 billion in aid to the Lebanese Army, pledging as the head of the top Sunni institution to continue supporting moderation against “extremism and terrorism.”

He said that extremism was a phenomenon that should be fought today not tomorrow, highlighting its contradictions with the teachings of Prophet Mohammad and the Quran.

“What is happening in Iraq, Syria, Lebanon, Yemen and Libya is an enormous tragedy, and the harm we are doing to ourselves is more than what the Israelis can do in Gaza and Palestine.”

He strongly criticized the fundamentalist group Islamic State of Iraq and Greater Syria’s (ISIS) practices against the Christians of Iraq.

“How is the Christian in Mosul and other areas forced to leave his religion and his home, and how is his life and his family threatened?” Daryan wondered, pledging to show solidarity and support to Christians oppressed by extremist Muslims.

This error message is only visible to WordPress admins