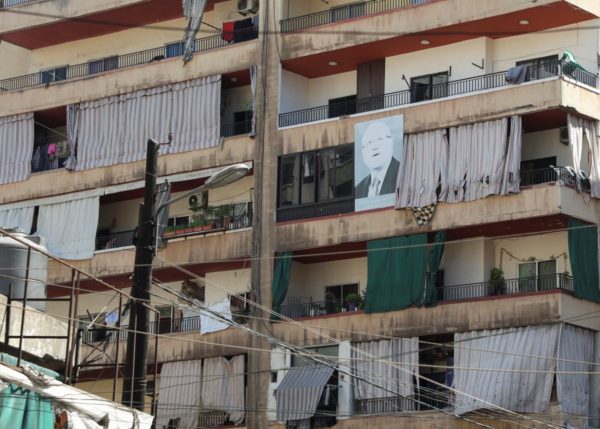 A picture of Lebanon’s Prime Minister-designate Najib Mikati is placed on a residential building in the northern city of Tripoli, Lebanon September 23, 2022. REUTERS/Mohamed Azakir
Share:

In the city from which Lebanon’s richest politicians hail, the poorest residents once again mourn their dead.

Among them, Mustafa Misto, a taxi driver in the city of Tripoli, and his three young children, whose bodies were found off Syria’s coast on Thursday after they left Lebanon on a migrant boat carrying more than 100 people.

It marks the deadliest such voyage yet from Lebanon, where mounting despair is forcing ever more people to attempt the perilous journey on rickety and overcrowded boats to seek a better life in Europe.

Before embarking on the ill-fated voyage, Misto had fallen heavily into debt, selling his car and his mother’s gold to feed his family yet still unable to afford simple things, like cheese for his childrens’ sandwiches, relatives and neighbours said.

“Everyone knows they may die but they say, ‘Maybe I may get somewhere, maybe there is hope,'” said Rawane El Maneh, 24, a cousin. “They went… not to die, but to renew their lives. Now they are in a new life. I hope it’s much better than this one here.”

The tragedy has underscored soaring poverty in northern Lebanon, and Tripoli in particular, that is driving ever more people to take desperate measures three years into the country’s devastating financial collapse.

It has also brought into focus stark inequalities that are particularly acute in the north: Tripoli is home to a number of ultra-rich politicians but has enjoyed little in the way of development or investment.

While many of Lebanon’s sectarian leaders have spent money in their communities to shore up political support, residents in Tripoli say their area has been neglected despite the wealth of its politicians.

“We’re in a country where politicians just suck up money, talk, and have no regard for what people need,” El Maneh said.

Tripoli, Lebanon’s second city with a population of roughly half a million, was already Lebanon’s poorest before the country plummeted into financial crisis, the result of decades of corruption and bad governance overseen by ruling elites.

Mohanad Hage Ali of the Carnegie Middle East Center said Tripoli had seen no major development efforts since the 1975-90 civil war despite the political rise of rich businessmen from the city. This “resembled the growing inequality and income disparity in the country”, he said.

Mikati made much of his fortune in telecoms and is ranked the Arab world’s fourth richest man in 2022 by Forbes.

Mikati’s office said in a statement to Reuters on Thursday that he had been the “biggest supporter of socio-economic development in Tripoli” for more than 40 years, through his charitable foundations.

He also understood “the agony the people of Lebanon in general and Tripoli in particular are going through,” due to the crisis, it added.

Mikati’s seaside mansion on the city’s edge, known locally as “Mikati’s Palace”, has been a rallying point during protests in recent years over government corruption and economic desperation.

A Lebanese prosecutor in October 2019 charged Mikati with illicit enrichment for using funds designated for a subsidized housing loan scheme for poor families – accusations he has denied.

His office said the charges were “politically motivated to smear” his reputation, and noted another judge dropped the case earlier this year.

Reflecting a disconnect between people in Tripoli and the politicians and a belief nothing will change, just three in 10 people in the city voted in May parliamentary elections.

The north has been one of Lebanon’s most troubled regions since the end of the civil war. The city and its surrounding areas have been a fertile recruiting ground for young Sunni Muslim jihadists.

Most recently, Tripoli has been a focal point of a worsening security situation linked to the financial collapse.

Interior Minister Bassam Mawlawi has announced a new security plan that followed a spike in crimes and violence.

Several dozen of the people on the migrant boat came from the sprawling Palestinian refugee camp of Nahr al-Bared, according to camp residents. There were also many Syrians, around 1 million of whom live in Lebanon as refugees.

The economic crisis has led poverty to sky-rocket, with 80% of the population of some 6.5 million poor, according to the United Nations. The government has done little to address the crisis, which the World Bank has called a deliberate depression “orchestrated” by the elite through its exploitative grip on resources.

The U.N. Refugee Agency said 3,460 individuals had left or attempted to leave Lebanon by sea this year, more than double the number in the whole of 2021.

Those who perished on the boat carrying Misto also included a woman and her four children from the northern Akkar region. The father was one of few survivors, said Yahya Rifai, the mayor of their town. He said the crisis was worse than the civil war.

“I don’t know what’s wrong with these politicians,” he said. “They will have to answer for this.”