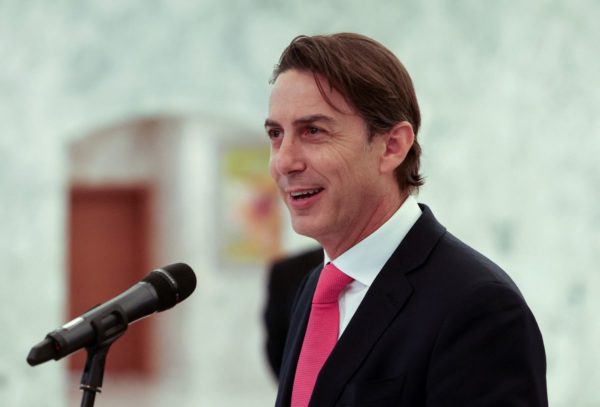 The Biden administration is on the verge of a significant breakthrough in Middle East relations as it quietly pursues an agreement between Israel and Lebanon on territorial maritime borders.

The negotiations appear to be closing in on the finish line amid intensive negotiations between U.S., Israeli and Lebanese officials that took place this week on the sidelines of the United Nations General Assembly in New York.

The administration has taken pains to downplay the significance of the potential agreement — concerned that anything that appears to look like normalization between Israel and Lebanon would set off a catastrophic fight with Hezbollah, which has an estimated 150,000 missiles positioned on Israel’s northern border.

But if successful, an agreement between Lebanon and Israel — with Beirut implicitly recognizing Israel’s legitimacy while the two sides are at war — would mark a tremendous victory for the Biden administration’s use of diplomacy to advance Middle East stability.

The negotiations are being led by ​​Amos Hochstein, special presidential coordinator for international energy. He launched mediations between Israel and Lebanon in mid-October, following up on talks that were initiated during the former Trump administration in 2020.

The talks have gained little attention, in part because of greater world crises such as the Russian invasion of Ukraine. But this also reflects an effort on the part of the administration to maintain a low profile.

“I think this is being managed quite well on the part of the administration and Amos Hochstein in particular,” Yacoubian said.

“He’s really been very diligent in his shuttle diplomacy. I think he’s demonstrating, really, and he’s embodying what the hard work of diplomacy looks like and, if there is a deal, what it can yield.”

The agreement is expected to draw a border between Israel and Lebanon in the eastern Mediterranean Sea and demarcate claims that both Beirut and Jerusalem identify as their exclusive economic zone. It would sort out how the two nations could benefit from exploration of gas field.

Lebanese officials are signaling major progress in reaching a deal. Lebanese Prime Minister-designate Najib Mikati said during his speech at the General Assembly that “we have achieved tangible progress which we hope will reach its aspired conclusions soon.”

Part of the progress is a consensus between Israel and Lebanon on the benefits of resolving the maritime boundary. Israel wants to avoid conflict with Lebanon and generally advance its relations in the region, and Lebanon is in dire need of any economic benefit that would come from being able to explore gas extraction in this part of the Mediterranean Sea.

While the agreement on the maritime boundary is unlikely to yield immediate economic benefits for Lebanon, which is viewed as being in a crisis economic state, it is viewed as a positive development.

A potential agreement is under a time crunch.

Energean, the Greek-British energy company that holds a license to develop the Karish gas field, said in a September press release it “remains on track to deliver first gas from the Karish development project within weeks.”

The development of the fields could help European countries wean themselves off Russian natural gas.

“As Europeans seek substitutes for Russian energy sources, the eastern Mediterranean is becoming increasingly important in that regard,” Yacoubian said.

But Hezbollah, the U.S.-designated terrorist group that controls southern Lebanon and holds immense power in the country, has over the last few weeks increased the number of its threatening statements against Israel over the border negotiations and gas extraction.

Hezbollah leader Hasan Nasrallah said last week that “we are following up on the negotiations and all our eyes are on Karish and our missiles are locked on Karish.” He warned Israel against extracting gas absent an agreement with Lebanon.

“The red line to us is that there should not be extraction from Karish,” he said, in televised remarks

A spokesperson for Israeli Prime Minister Yair Lapid responded in a statement Monday that gas extraction is not connected to the U.S.-mediated negotiations.

And in a briefing with reporters on Wednesday in New York, Lapid said that “Israel is strong and knows how to defend itself” if an agreement is not reached with Lebanon addressing Israel’s “security, diplomatic and economic needs,” Axios reported.

Yacoubian, of the Institute of Peace, said that Nasrallah’s threats appear to be “theater.”

“It’s a lot of saber rattling, but that might be because it’s a prelude to a negotiated agreement,” she said.

“In other words, saber rattling as a way of Hezbollah establishing itself as an actor working towards Lebanon’s benefit — so that when this deal comes, they shape their role in that way, that it was partly their pressure, their strong line on defending Lebanon’s interests that helped get Lebanon a deal.”

Hawkish regional watchers believe Nasrallah’s threats are laying the groundwork for an outbreak of conflict. Israel views Hezbollah as one of its greatest security threats and an arm of Iran’s greater ambitions to attack the Jewish state.

“The Iranians, in their stomach, are trying to [take] revenge against Israel,” said Eitan Dangot, president of the Association of Oil and Gas Exploration Industries in Israel and former chief of the Israel Home Front Command.

“Hezbollah is not working for the defense of Lebanon, Iran is giving it the green light to open its [missile] storage on Israel.”

Hezbollah’s determined threats against Israel is a point the Israel Defense Forces constantly reinforce to the world. The IDF has destroyed, but preserved, at least half a dozen Hezbollah tunnels dug under Israel’s northern border.

They regularly bring international visitors to tour the tunnels, marching them 80 meters, or more than 260 feet, underground to view the sophisticated engineering needed to burrow through solid bedrock and demonstrate what they say is Hezbollah’s determination to wage war on Israel.

U.S. Ambassador to the United Nations Linda Thomas-Greenfield visited the tunnels in November, and the IDF tweeted a photo of a delegation of ambassadors and diplomats visiting the tunnels in March.

”Seeing the tunnel with your own eyes changes your perception completely. Only then can you truly understand the lengths Hezbollah goes to in order to harm Israeli civilians,” Lt. Col. Richard Hecht, IDF international spokesperson, told The Hill.