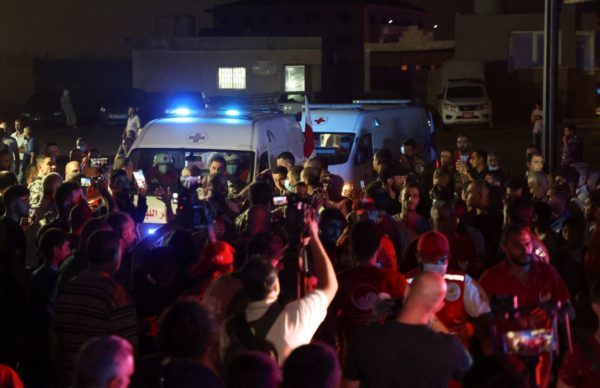 People gather near Lebanese Red Cross vehicles that carry dead bodies of people that were aboard a migrant boat which according to Lebanese and Syrian officials sank off at Syrian coast after sailing from Lebanon, at the Lebanese-Syrian border crossing in Arida, Lebanon September 23, 2022. REUTERS/Mohamed Azakir
Share:

– The death toll from a migrant boat that sank off the Syrian coast after sailing from Lebanon earlier this week has risen to 94, after more bodies were recovered from Syria’s Baniyas coast on the Mediterranean, Syrian state TV said on Saturday.

It is the deadliest such voyage yet from Lebanon, where mounting economic desperation has led many to board often rickety and overcrowded boats in the hope of reaching Europe.

Syrian authorities began finding bodies off the coast of the northern port city of Tartus on Thursday afternoon. The Syrian transport ministry quoted survivors as saying the boat had left from Lebanon’s northern Minyeh region on Tuesday with between 120 and 150 people on board, bound for Europe.