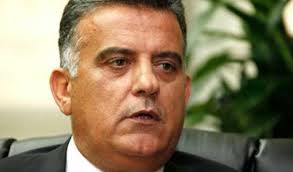 Major General Abbas Ibrahim , head of Lebanon’s Directorate of General Security (DGS) is a member of the Amal Movement which is closely associated Hezbollah
Share:

On his trip to Washington DC last week, Lebanon’s security chief brought with him a list of demands from Damascus. The Trump administration wants to secure the return of American journalist Austin Tice and Syrian-American health worker Majd Ka­mal­maz, both missing in Syria; the government of Syrian President Bashar al-Assad is looking for relief from crippling sanctions and the withdrawal of U.S. troops in exchange for its cooperation, Newsweek has learned.

Tice, a freelance journalist who disappeared in Syria in 2012, and Kamalmaz, a psychotherapist who vanished in the country in 2017, are at the center of the interactions between Washington and Damascus, which have not had formal diplomatic relations since 2012. Officials from both countries have previously established contact on the matter, but a new push came during a recent trip by Lebanese General Security director Major General Abbas Ibrahim, which comes less than three weeks before the U.S. presidential election.

Ibrahim visited Washington on Thursday, carrying with him information regarding Tice and Kamalmaz, a Lebanese official told Newsweek. The official, who was not authorized to talk on the matter, was granted anonymity.

Ibrahim met with White House national security adviser Robert O’Brien for some four hours in a discussion that outlined Syrian demands as part of a negotiation to end the uncertainty about the two apparently captive men’s whereabouts, the Lebanese official said.

The Lebanese official, as well as a Syrian source familiar with the discussions, confirmed that the Syrian government is seeking to arrange with the Trump administration a deal that would entail the lifting of sanctions levied on Syria. The economic restrictions began shortly after unrest consumed the country in 2011, with the latest round announced in June, aimed at stifling the government of President Bashar al-Assad who the U.S. has accused of war crimes.

Such an arrangement would also include the withdrawal of U.S. troops stationed alongside rebel forces at a southeastern Syrian desert garrison called Al-Tanf, the Lebanese official and Syrian source told Newsweek.

Trump has long expressed an eagerness to withdraw troops from Syria and has drawn down the number of U.S. forces there, though the Pentagon says about 500 remain deployed across the northeast alongside the mostly Kurdish Syrian Democratic forces, and in Al-Tanf, where opposition group Maghawir al-Thawra operates.

Newsweek interviewed a U.S. official involved in hostage recovery efforts about the work of the multi-agency Hostage Recovery Fusion Cell, the U.S. government epicenter for U.S. hostage investigation, government coordination and collaboration with hostage families, to return U.S. citizens being held against their will abroad.

The official said the cell was working alongside the families of Tice and Kamalmaz, who have been vocal in advocating for their return.

Shortly after Newsweek‘s article was published, Tice’s parents, Marc and Debra, released a statement in response to the most recent development regarding their son’s case.

“For years we have pushed for engagement between the US and Syrian governments to help bring our son safely home, so we hope recent reports are accurate,” the pair said.”We are deeply grateful to everyone working for Austin’s safe return, and his continued absence shows there is more to be done.”Trump Must Talk to Russia and Syria If He Wants U.S. Out of War, Allies Say

Tice, a Marine Corps veteran who served in Afghanistan and Iraq before giving up the pursuit of a law degree to become a photojournalist, vanished in the southern Damascus suburb of Darayya in August 2012.

He had entered Syria in May of that year and reported on the escalation of the country’s civil war, filing stories to the Washington Post, CBS and McClatchy, where reports he contributed to earned a George Polk Award in February 2013.

Over a month after he vanished, a 46-second, handheld video emerged online that purported to show Tice, blindfolded and marching through rugged terrain by a group of armed men shouting “God is greater” in Arabic. The detainee that friends and family believe to be Tice speaks to the camera, in broken Arabic, an Islamic prayer often recited before death. The clip abruptly ends.

The men have never been identified, nor has any other footage emerged of Tice.

Kamalmaz has not been seen since reportedly being stopped at a security checkpoint in Mezzeh, southwestern Damascus suburb. He was in Syria to visit an elderly relative and sought to establish a clinic for those displaced by the conflict, according to his family, who said they received secondhand proof of life months after his disappearance from a former detainee who said he met Kamalmaz in prison.

Asked about the latest developments in the cases of Tice and Kamalmaz, the U.S. official involved with hostage recovery efforts told Newsweek, “The U.S. government abides by strict protocols when trying to verify the status of any given hostage.”