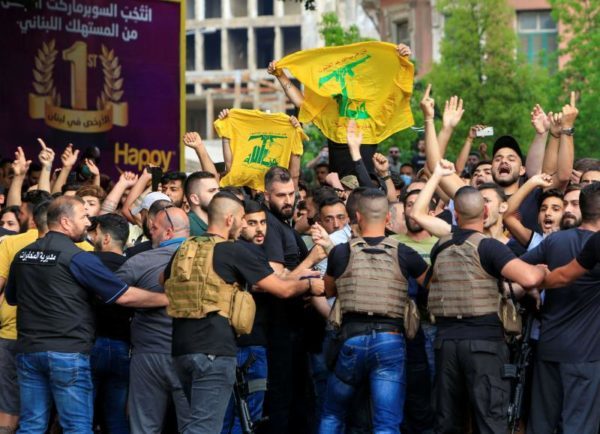 Lebanese army try to block supporters of Iranian backed Hezbollah militant group and Amal who were trying to disrupt the protests calling for disarming of Hezbollah in Beirut, June 6. (REUTERS)
Share:

Protests in Beirut in recent days over government corruption and mismanagement quickly escalated into rioting and sectarian violence that included clashes between Shi’ite Hezbollah supporters and other demonstrators. Analysts say there are now renewed calls for the powerful Hezbollah militia, also represented in the government and parliament, to disarm.

Analysts say Lebanon may be facing its biggest threat to stability since the end of the country’s 15-year civil war in 1990. A spiraling economic crisis, the coronavirus outbreak, and national protests have raised fears of a new slide into sectarian violence.

While demanding better living conditions and tougher measures to fight corruption, demonstrators are urging Hezbollah to disarm. That demand ignited violent rage from supporters of the powerful Shi’ite paramilitary group backed by Iran, forcing Lebanese President Michel Aoun to call for national unity. Lebanon maintains a fragile sectarian balance after its many religious sects fought the civil war. Professor Habib Malik of the Lebanese American University tells VOA that the spotlight on Hezbollah’s misconduct is raising calls to counter its powerful influence over Lebanon.

“Hezbollah is much more disliked, or I would say even hated on the streets. They realize that Hezbollah is a big obstacle in the rescuing of Lebanon and is a big contributor to where we have reached in Lebanon—Hezbollah’s own personal involvement in corruption. The mere fact that they actually protect and cover up for well-known corrupt individuals and groups, that’s enough to implicate them in the whole corruption thing,” Malik said.

Lebanon is one of the world’s most indebted countries with debt equivalent to more than 170% of its GDP. Ongoing talks with the International Monetary Fund over an initial $10 billion bailout could be jeopardized by Hezbollah, fearing the reforms required by donors to tackle the financial crisis.

Political forces in Lebanon have also renewed pressure on Hezbollah to reform or face possible U.S. sanctions, under legislation known the Caesar Act, because of its military support to the Syrian government. Sanctions would prove catastrophic for the country, analysts say.

Mona Alami, a nonresident senior fellow with the Atlantic Council’s Middle East programs, says Hezbollah had worked “for years on integrating itself into the Lebanese state. Now that the country is falling apart, Hezbollah’s assimilation into the state apparatus could pose a direct threat to the group’s future” as well as to Lebanon, Alami says.

Iran’s dwindling financial support to Hezbollah, Alami says, has made it “increasingly reliant on the state.” Its control over Lebanon’s borders with Syria also have allowed it “to engage in a number of smuggling activities—including food, petrol, and drugs—and counterfeiting money,” sources close to the fighters have told her.

Alami says Hezbollah “is forced to maintain a belligerent foreign policy aligned with Iran, at Lebanon’s expense,” while locally “it is the hostage of discredited allies. Both are running Lebanon into oblivion.”

Lebanese have held protests since October to demand political change.