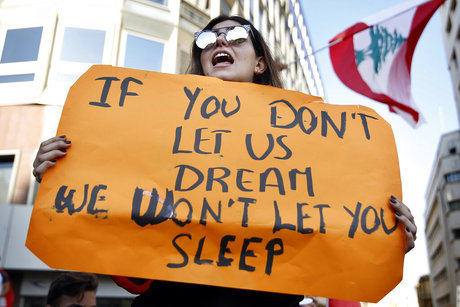 A student protester holds a placard as she chants slogans against the Lebanese government, in Beirut, Lebanon, Tuesday, Nov. 12, 2019. Protesters in Lebanon resumed demonstrations on Tuesday blocking some roads and governmental institutions. (AP Photo/Bilal Hussein)
Share:

Unprecedented protests erupted across Lebanon on October 17, demanding the ouster of a generation of politicians seen by demonstrators as inefficient and corrupt.

The government stepped down on October 29 but it remains in a caretaker capacity as no overt efforts have been made to form a new one.

Dozens of protesters gathered near the Palace of Justice in central Beirut on Tuesday morning, demanding an independent judiciary, an AFP correspondent said

In the town of Aley east of Beirut, in the southern city of Tyre, and the eastern town of Baalbek, demonstrators held sit-ins outside or inside the offices of the state telecommunications provider, local media reported.

Many schools and universities were closed, as were banks after their employees called for a general strike over alleged mistreatment by customers last week.

Banks have restricted access to dollars since the start of the protests, sparking fears of the devaluation of the local currency and discontent among account holders.

The central bank on Monday however insisted the Lebanese pound would remain pegged to the dollar and said it had asked banks to lift restrictions on withdrawals.

Students, who have emerged as key players in the uprising, were expected to hold further demonstrations later in the day ahead of a presidential address in the evening.

The leaderless protest movement first erupted after a proposed tax on calls via free phone applications, but it has since morphed into an unprecedented cross-sectarian outcry against everything from perceived state corruption to rampant electricity cuts.

People in the street say they are fed up with the same political families dominating government institutions since the end of the 1975-1990 civil war.

Protesters are demanding a fresh cabinet include independent experts not affiliated to traditional political parties, but no date has yet been set for required parliamentary consultations.

Government formation typically takes months in Lebanon, with protracted debate on how to best maintain a fragile balance between religious communities.

The World Bank says around a third of Lebanese live in poverty, and has warned the country’s struggling economy could further deteriorate if a new cabinet is not formed rapidly.