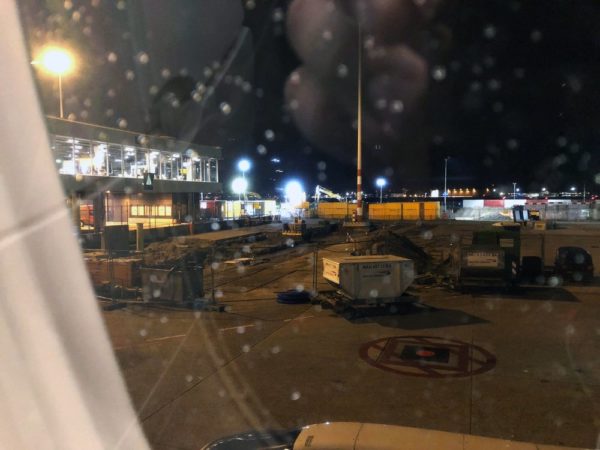 A plane waits for take off at Amsterdam Schiphol Airport after a security alert was issued about another plane at the airport in Schiphol, Neatherlands, on Wednesday, Nov. 6, 2019. (Giorgio Bonfiglio/@g_bonfiglio via AP)
Share:

By PETER DEJONG and MIKE CORDER

SCHIPHOL, Netherlands (AP) — An accidental hijack warning set off from the cockpit of a plane triggered a big security operation at Amsterdam’s Schiphol Airport on Wednesday night, a Spanish airline and Dutch military police said.

Air Europa said in a tweet that the scare that sent emergency services rushing to the airport was a false alarm.

The warning that triggers hijack protocols at airports “was activated, by mistake,” on a plane that was bound for Madrid, the carrier tweeted. It did not say who activated the warning or how.

“Nothing has happened, all passengers are safe and sound waiting to fly soon. We deeply apologize,” the airline said.

The Dutch military police service earlier said it was responding to a suspicious situation at the airport on the outskirts of Amsterdam. Dutch media reported that heavily armed arrest teams and other emergency service forces were deployed to the airport.

The military police said in a tweet that it followed all protocols following the alarm and would now investigate how the report of a hijack or hostage situation came from the plane’s cockpit.

The local mayor responsible for the Schiphol region, Marianne Schuurmans, said it took two hours to give the all-clear signal.

“Further investigation by the military police must determine exactly what happened,” Schuurmans said.

Willem Schmid, president of the Association of Dutch Pilots, said there are two ways a pilot can raise the alarm in a hijacking situation — via the plane’s radio or by entering a code in its transponder, a device that communicates with air traffic control.

“Which was used and why, let’s investigate that so we can learn from it, so it doesn’t happen too often,” Schmid said in a telephone interview.

Dutch Justice Minister Ferd Grapperhaus said in a tweet that he was impressed by the “sharp and alert response of authorities and services, both local and national.”

By late evening, an AP photographer at the airport’s main entrance said the situation appeared calm, with military police and civilian police officers visible inside the building. Cars picking up and dropping off passengers continued to arrive as normal.

Many departing flights were delayed, but the airport said in a statement that “regular operation” had resumed.

The alert in the Netherlands came as Milan’s Malpensa Airport was briefly closed while police investigated a suspicious item in someone’s luggage that turned out to be a harmless computer part. Flights were taking off and landing normally during that time.