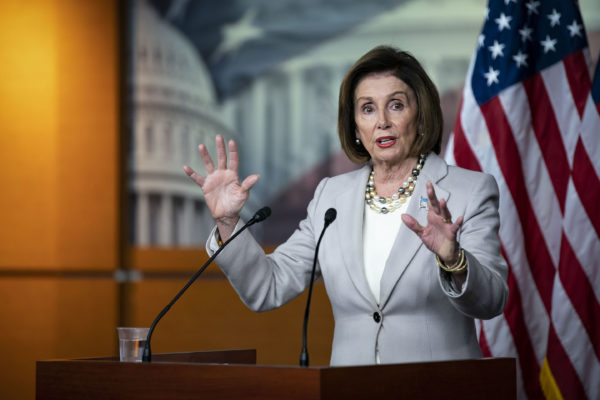 “I would assume there would be public hearings in November,” Pelosi said in a roundtable with Bloomberg reporters and editors. Any case that is made to impeach the president “has to be ironclad.”

Pelosi spoke a day after the House voted to set up a formal process for public hearings in an investigation of whether Trump used his office to pressure Ukraine to open a politically motivated investigation in exchange for releasing military aid.

Pelosi said the closed-door depositions of witnesses will continue as long as they are “productive.”

“I don’t know what the timetable will be — the truth will set us free,” she said. “We have not made any decisions on if the president will be impeached.”

Pelosi also said that Congress should pursue an impeachment inquiry regardless of its impact on financial markets. “The markets have their own strength and their resilience,” she said.

She discussed several other issues during the roundtable Friday, calling Trump’s new Nafta deal the “easiest trade deal that we’ve ever done.” She also said Democrats would be tougher on China than Trump by aligning with the European Union, rather than alienating those countries, to bring additional pressure on Beijing.

On impeachment, Pelosi didn’t rule out the investigation continuing into 2020 — an election year — saying the emergence of new investigative leads cannot be predicted.

“There is — I should say — a mountain of concerns to be brought up,” she said, while also acknowledging the public’s attention span is limited. “When does the law of diminished returns set in?”

“There has to be clarity” for the public in any case for impeachment, she added, noting that the July phone call between Trump and Ukraine’s president provided such clarity. “Of course. It changed everything in the public mind.”

Trump, she noted, has described the call as perfect. “No, it’s perfectly wrong — you can’t do that,” she said.

If the House takes a formal vote on articles of impeachment, possibly before the end of the year, it would take a two-thirds majority vote in the Republican-controlled Senate to convict the president, and therefore remove him from office. That’s an outcome viewed at this point as highly unlikely.

Pelosi has staunchly defended Thursday’s mostly straight party-line vote to formally initiate the investigation, though she had been saying for months such a vote was unnecessary.

Two Democrats who represent Republican-leaning districts voted against the measure laying out the investigative steps ahead. Not a single GOP House member voted in favor. Michigan Representative Justin Amash, a Republican turned independent who has been a Trump critic, voted for the resolution.

A super-PAC aligned with Republicans announced immediately after the vote that it will target digital advertising against the 29 Democrats representing Trump-won districts who voted for the investigation.

Those more moderate Democrats were central to Pelosi’s party winning the House majority in 2018. Trump’s re-election campaign this week debuted a national television commercial attacking Democrats, including Pelosi, for not focusing on “real issues.”

Trump, who becomes just the fourth president to be subject to a formal impeachment effort, will have to keep the Republican Party unified not just to prevent his removal from office by the Senate but also at the hands of voters in 2020.

The acrimony that was evident before and after the vote may only widen as the process heads toward a more public airing of the details of Trump’s pressure on Ukraine to investigate Democrats and Joe Biden, a potential challenger in the 2020 election.

With many of the facts already confirmed publicly by White House documents and Trump himself, the ultimate question for lawmakers to decide will be whether that conduct is impeachable.

Polls show roughly half of the public backs the investigation, though not necessarily Trump’s removal from office. That ranges from 55% in a mid-October Quinnipiac University poll to 48% in a Grinnell College survey about the same time.