BEIRUT – Protesters formed a human chain across Lebanon on Sunday, the eleventh day of unprecedented rallies against politicians accused of corruption and steering the country toward an economic collapse unseen since the 1975-90 civil war.

Protesters joined hands along Lebanon’s coastal roads attempting to span 171 kilometers from south to north. The country has been paralyzed by road blocks set up by protesters drawn from across Lebanon’s sectarian spectrum. 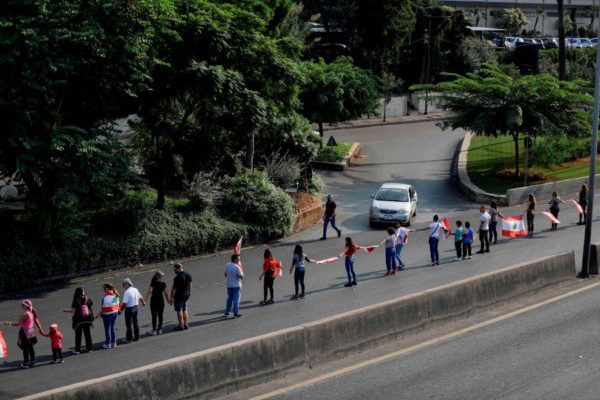 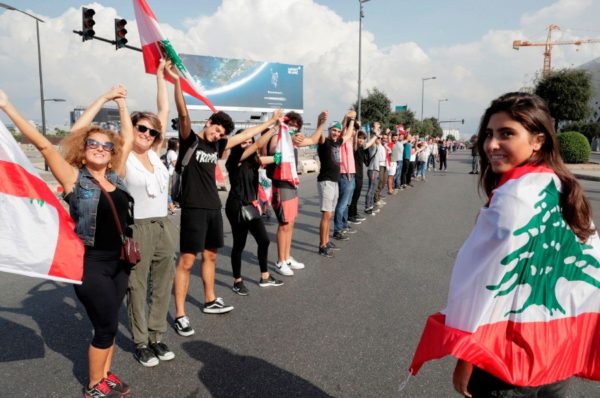 “The idea is that from the north to the south we are united and making a stand together,”  an organiser  said in Zeituna Bay, who asked to be called a “daughter of Beirut.” 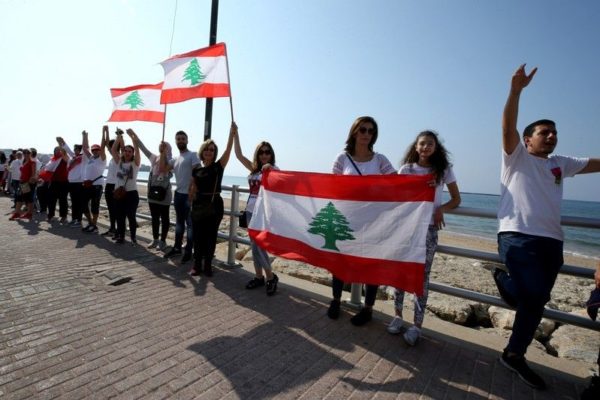 “We are one people and we love each other,” she told AFP, in between coordinating on one of her two mobile phones.

On the main highway northeast of Beirut, another AFP photographer saw dozens standing along a stretch of highway under a rocky hillside covered in bushes.

In the southern city of Tyre, protesters standing in a line held the edges of a long Lebanese flag, local television showed. A young boy played with it, making it billow up and down.

The protests have been remarkable for their territorial reach and the absence of political or sectarian banners, in a country often defined by its divisions.

The leaderless protest movement, driven mostly by a young generation of men and women born after the 1975-1990 civil war, has even been described by some as the birth of a Lebanese citizen identity.

The army has sought to re-open main roads across the country, where schools and banks have been closed for more than a week.

In one of the most serious incidents, the army opened fire on Friday to confront a group of protesters blocking a road in Tripoli, wounding at least six people.

But the unprecedented protest movement has been relatively incident-free, despite tensions with the armed forces and attempts by party loyalists to stage counter-demonstrations.

Protesters have been demanding the removal of the entire ruling class, which has remained largely unchanged in three decades.

Many of the political heavyweights are former warlords seen as representing little beyond their own sectarian or geographical community.

The protesters see them as corrupt and incompetent and have so far dismissed measures proposed by the political leadership to quell the protests.

“We’ve had the same people in charge for 30 years,” said Elie, a 40-year-old demonstrator walking in central Beirut on Sunday morning with a Lebanese flag.

Prime Minister Saad Hariri on Monday announced a package of economic reforms which aims to revive an economy that has been on the brink of collapse for months.

His coalition partners have supported the move and warned that a political vacuum in times of economic peril risked chaos.

But the protesters have accused the political elite of desperately attempting to save their jobs and have stuck to their demands for deep, systemic change.

Lebanon’s banking association said banks would remain closed on Monday, the first day of the working week. Schools and many businesses have shut their doors and banks have already been shut for eight working days. 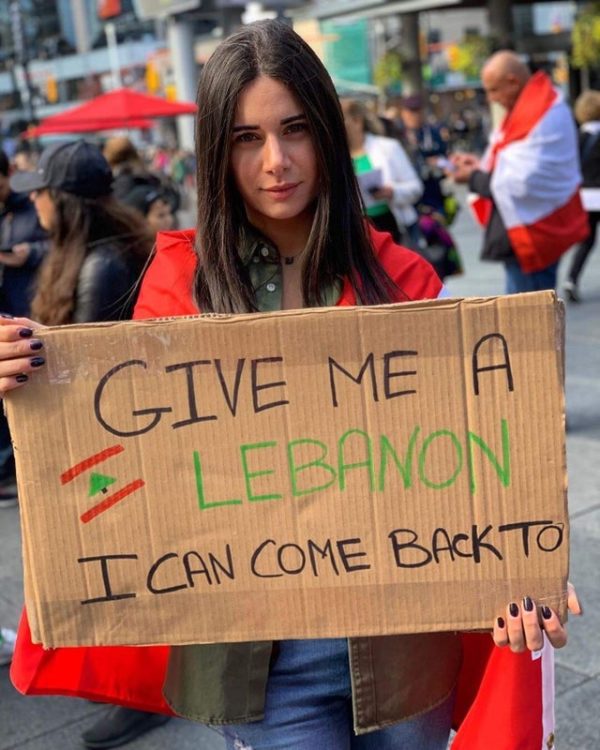 The nationwide protests are targeting a political class accused of abusing power to exploit state resources for their own benefit. Financial strains are surfacing, including a scarcity of dollars and pressure on the pegged Lebanese pound.

The government announced an emergency reform package this week, but this failed to defuse anger or to unlock funds from donor states which pledged $11 billion of financing to Lebanon last year, conditional on it enacting badly-needed reforms.

The size and geographic reach of the protests have been extraordinary in a country where political movements have long been divided along sectarian lines and struggle to draw nationwide appeal.

“We’re here to show the whole world that we are united,” said Rasha Hijazi, joining hands with others in the southern city of Sidon. “Everyone is coming to stay united against the corruption we are living with in this country.”

Asked in a WhatsApp message what was expected at the political level, one senior politician replied “deadlock”. A second said “there are no new developments regarding the deadlock”.

Lebanon’s Maronite Patriarch Bechara Boutros Al-Rai said the government could not ignore the people’s “cry” for a small, politically neutral cabinet and should comply with their demands before it is too late, the National News Agency reported

At the Vatican, Pope Francis offered his prayers on Sunday for young people protesting in Lebanon and asked for the international community’s support to keep the country a place of “peaceful coexistence”.