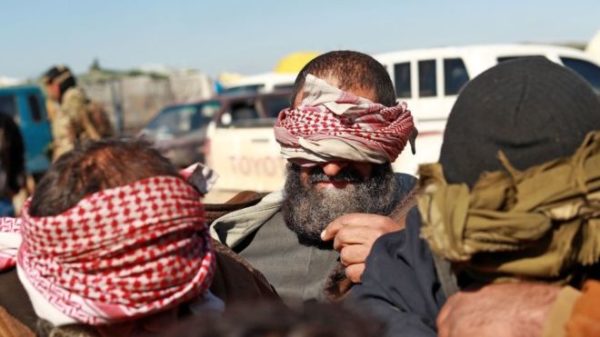 Suspected IS fighters captured in Syria earlier this year
Share:

As United States forces withdraw from their positions in northern Syria, and Turkish forces move in, the fate of thousands of Islamic State group prisoners remains unclear.

The detainees and their families – held by Kurdish-led forces – include foreigners from various parts of the world.

The US has called on foreign states to repatriate their nationals, accusing European nations of failing to do so.

So, how many foreign nationals are being held by Kurdish-led forces and have any countries taken them back?

Islamic State group prisoners are being held in a number of camps in northern Syria.

Additionally, some 12,000 suspected IS fighters are held in seven prisons in north-east Syria, of whom about 4,000 are estimated by Human Rights Watch to be foreigners (that is, neither Syrian nor Iraqi).

A US government report published in August has a lower figure for foreign adult combatants held in northern Syria – 2,000, originating from 50 countries.

Of these, about 800 are from European nations while the rest are from the Middle East, north Africa or Asia.

To put that into context, a study last year by King’s College’s International Centre for the Study of Radicalisation estimated more than 41,000 foreign nationals had joined IS in Iraq and Syria between April 2013 and June 2018.

Has anyone taken back their nationals?

The United Nations has said countries should take responsibility for their citizens and take them back if not charged.

Many countries have been reluctant to do so, worried about public opinion and the legal challenges of dealing with citizens who joined IS.

It says more than 1,200 foreign nationals – mainly children – have been repatriated from both Syria and Iraq to Kazakhstan, Uzbekistan, Tajikistan, Russia, Kosovo, and Turkey.

But other nations have taken back only very small numbers:

In some cases, foreign nationals have been transferred to Iraqi jurisdiction and tried in that country’s courts. Earlier this year, four Frenchmen were sentenced to death in Iraq in a judicial process heavily criticised at the time.

Some foreign governments have revoked citizenship to prevent a return – for example in the case of Shamima Begum, from the UK, who is being held in a camp in Syria.

Far larger numbers of foreigners who joined IS are likely to have made their own way home before the fall of the group this year.