Cleanup of Lebanon’s shores: is it enough to solve waste crisis? 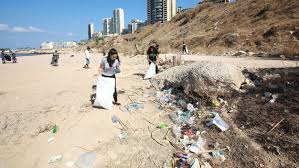 BEIRUT — On June 9, a national campaign was set in motion to clean up the Lebanese coast and sea, from the south to the north, with the participation of a large number of volunteers and some local associations.

The campaign was launched by Minister of Environment Fady Jreissati during a press conference held at the Ministry of Environment on June 3. The ministry identified 120 sites to be cleaned up under the Save Our Face campaign.

Jreissati said the campaign aims to “raise awareness among beachgoers of the importance of not littering and realize the environmental impact on our economy.” He added, “We also want to let the countries in the Mediterranean Basin know that Lebanon is responsible, and this is why we chose #SaveOurFace to represent this campaign. I assure you we will save our face and improve our reputation.”

“The campaign aims to educate people as well as institutions. It will also include cleaning the bottom of the sea, not just the shore,” said Jreissati adviser Joseph Asmar

Asmar told Al-Monitor, “Save Our Face is particularly significant as it will cover the entire coast, from the south to the north, and many citizens who realize the importance of improving Lebanon’s environment are taking part.”

The national cleanup began in the southern city of Tyre, in the presence of Jreissati, member of parliament Inaya Ezzeddine, Tyre Mayor Hassan Dabouq and the commander of the western sector of the UNIFIL, Gen. Bruno Bishota of Italy.

On May 29, National Geographic magazine said the beach at Tyre was one of the most beautiful in the Middle East. This prompted Jreissati to choose Tyre as the starting point for the campaign. “Lebanon has a national event to celebrate today; Tyre is a gift to all of Lebanon, and this classification will attract tourists,” he said during the cleanup in Tyre. He said he hoped to turn the Lebanese coast into a nature reserve and put an end to all sorts of pollution there.

Ezzeddine said, “We are not standing here by coincidence. We are here to address our environmental problem, in which the state, municipalities, associations and everyone should be involved. The campaign does not end here. This is only the beginning and we will continue to clean and preserve the environment.”

The Lebanon Diving Center, an environmental diving school that began its work in 2015 in Tyre, called on citizens to volunteer as part of the national cleanup campaign.

Center spokesman Mustafa Raad told Al-Monitor, “Over 2,000 volunteers took part in the cleanup in Tyre. Some took to the shore while others handled the sea. Twenty-five professional divers from our center collected over 20 bags full of glass bottles, fishing nets, plastic bags and other waste from the bottom of the sea. Trucks then transported them to the solid waste treatment plant in Sarafand.”

The center has previously called for similar campaigns, as it regularly takes part in beach cleanups in Tyre, in cooperation with the municipality and the Tyre Coast Nature Reserve.

Raad said, “The national campaign is good but does not address the basic problem. It is part of the solutions that we must build on to restore the health of the sea, including stopping the sources of bacterial pollution, such as sewage and dumps on the sea.”

He added, “According to the latest report of the National Council for Scientific Research in 2018, the shore of Tyre was classified as the second cleanest [in Lebanon] after the Naqoura shore in terms of the number of bacterial colonies in 100 milliliters of water.”

In Tyre, where more than 350 volunteers were helping clean the beach, Jreissati said he hoped the municipality, which he said will continue on with the cleanup, “could start fining those who pollute the shore.”

On the same day, Jreissati also inspected Nahr al-Kalb beach north of Beirut, accompanied by Minister of Energy and Water Nada Bustani; the environment minister also participated in a cleanup of Batroun’s coast in northern Lebanon.

On the same day, more than 450 young men and women took part in cleaning up the shore of Mina in northern Lebanon; Jreissati concluded the day by helping clean up Aabdeh beach in the northern city of Akkar.

While Save Our Face received broad acclaim, it also came under criticism. Some rejected its aims to improve the reputation of the Lebanese people. The Waste Management Coalition issued a statement June 8, saying, “Let’s boost our health before our reputation,” arguing that people’s health is more important.

“As we commend all initiatives to remove the country’s waste, we stand at odds with the Ministry of Environment’s priorities under the current circumstances,” the statement read, adding, “We are in trouble and before saving our face, we ought to immediately take action to find radical solutions to clean our blood and lungs of the toxins we inhale, eat and drink.”

Since the majority of the collected waste will end up in sea dumps, the Waste Management Coalition statement said, “It is essential to preserve the shore, but this will not solve the problem. It will be useless to gather waste while at the same time, there are about 1,000 random dumps of waste on the banks of the rivers. We will not achieve any change; we are in a tragic situation and our beach is plagued by dumps without any environmental impact assessment and without knowing if they meet the minimum safety requirements.”

Zeina Abla, a member of the civil political movement Beirut Madinati, told Al-Monitor, “The campaign seems like a good idea but it is dangerous to deviate from the real problem and divert attention from the responsibility that the competent authorities must bear.”

She added, “It is as if the campaign is telling us that the lack of waste management in Lebanon is the product of people littering, while the real issue lies in mismanagement and politics.”

Abla said, “This type of campaign does not address the pollution crisis resulting from solid waste mismanagement because the authorities have not yet implemented an integrated environmental policy that begins with waste reduction, sorting, recycling and proper treatment. Cleanups are usually considered simple tasks that associations have been carrying out for a long time, and it is the responsibility of the municipalities, whose tasks are to maintain public hygiene. Meanwhile, the ministry is supposed to play a larger and more important role in terms of an integrated waste management.”

Asmar said the Ministry of Environment has submitted a waste management plan to the government in hopes of getting approval to implement it as soon as possible. “It is an integrated plan to be applied from 2019 to 2030. It is based on sorting from the source, reducing waste and recycling, and covers all Lebanese areas that have been divided as service areas and we intend to involve municipalities as well. The plan includes several alternative proposals appropriate for all Lebanese areas. Yet the government has final say.”

Meanwhile, there is increasing discussion about waste returning to the streets of Beirut and Mount Lebanon, as sea dumps are also full, making it vital for the government to take a new step in this regard.