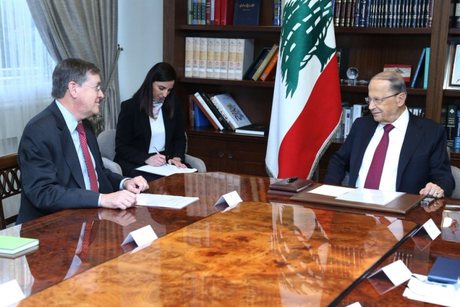 Lebanon bid farewell on Wednesday to former Maronite Patriarch Nasrallah Boutros Sfeir, who died Sunday.Patriarch Beshara al-Rai presided over  the  prayer service in Bkirki in mourning of Sfeir. The convoy carrying the body of Sfeir departed early on Wednesday from the Hotel Dieu De France Hospital in Ashrafieh heading to Bkirki. Scores of people lined the streets from Ashrafieh to Jounieh to pay their respects. The Lebanese flag was flown at half-mast over the Presidential Palace in Baabda in mourning.“His loss can’t be compensated for, ”his biographer Antoine Saad was quoted as saying

Aoun and Satterfield discussed the bilateral relations between Lebanon and the US, and the latest developments on the local and regional arenas, the National News Agency reported.

Satterfield had earlier met with Foreign Minister Jebran Bassil, but did not make a statement to reporters after the meeting.

It  urged its citizens to “keep a low profile,” be aware of their “surroundings,” review their personal security plans and have travel documents up to date.

This development  comes after  the U.S. ordered all non-emergency staff to leave its embassy in Baghdad and consulate in Arbil, as tensions mount between the United States and Iraq’s neighbor Iran.

Washington has ramped up pressure on Tehran in recent days, accusing Iran of planning unspecified “imminent” attacks in the region, and bolstering the American military presence in the Gulf.

A State Department advisory announcing the partial embassy closures warned of numerous “terrorist and insurgent groups” active in Iraq, including “anti-U.S. sectarian militias” who could “threaten U.S. citizens and Western companies throughout Iraq.”

Tensions have sharply escalated between arch-rivals Washington and Tehran since U.S. President Donald Trump withdrew last May from the 2015 international Iran nuclear deal which removed sanctions in exchange for curbs on Iran’s nuclear program.

The United Arab Emirates on Wednesday jailed six Lebanese men, four of them for life, for setting up a terrorist cell with links to Lebanon’s Hezbollah, the state news agency WAM reported. The UAE Federal Court sentenced two of the six men to 10 years each in jail and acquitted five others, WAM said.

The UAE, along with Saudi Arabia, Bahrain, Qatar, Oman and Kuwait – all U.S.-allied Sunni Muslim states – classified Hezbollah as a terrorist organization in 2016 and warned its citizens and resident expatriates against any links to it.

The 11 defendants, all of them Shi’ite Muslims who have lived and worked in the UAE for more than 15 years, were arrested in late 2017 and early 2018. They were charged in February with establishing a cell linked to the Hezbollah group, backed by Shi’ite Iran 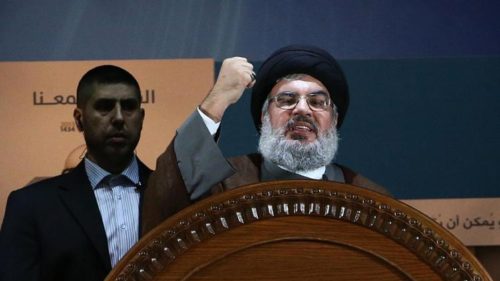 Video footage of a young Lebanese man, based in Saudi Arabia, seeking help from Hezbollah’s Secretary-General, Hassan Nasrallah after being fired from his job, provoked the anger of a Saudi prince as well as Saudi Tweeter users. Several social media users circulated a video clip of a Lebanese man talking about being fired from his job in Saudi Arabia because of his nationality while pleading Hezbollah Secretary-General Hassan Nasrallah for help. The Lebanese man indicated that he worked for a contracting company in Saudi Arabia for eight years and was expelled along with other 40 Lebanese and Syrian employees