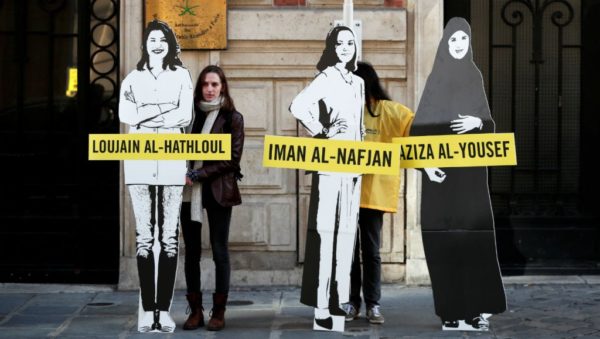 | A protest calling for the release of jailed women’s rights activists outside the Saudi Arabian embassy in Paris, on March 8, 2019.
Share:

Another campaigner close to the families of 11 women on trial told AFP five women had been temporarily released.

The activists, some of whom have accused interrogators of sexual abuse and torture during nearly a year in custody, face charges that include contact with foreign media, diplomats and human rights groups.

The siblings of activist Loujain al-Hathloul – one of the prominent detainees who was not among those freed on Thursday – have said they were being pressured by people close to the Saudi state to stay silent over her treatment in detention.

In an interview with FRANCE 24, Hathloul’s sister Alia said her sibling has been tortured and sexually abused during her detention.

‘My sister, Saudi activist Loujain al-Hathloul, has been tortured in prison’

Saudi prosecutors have roundly rejected the accusations of torture and abuse.

Riyadh has faced pressure from Western governments to release the women, most of whom were detained last summer in a wide-ranging crackdown against activists just before the historic lifting of a decades-long ban on female motorists.

But last month, Saudi Arabia mounted a fresh crackdown that sent shock waves through the kingdom.

Authorities arrested at least nine writers and academics, including two US citizens, in an apparent crackdown on supporters of the women activists on trial, campaigners said.

It marked the first major crackdown since the brutal murder of journalist Jamal Khashoggi inside the Saudi consulate in Istanbul last October, which sparked unprecedented international scrutiny of the kingdom’s human rights record.