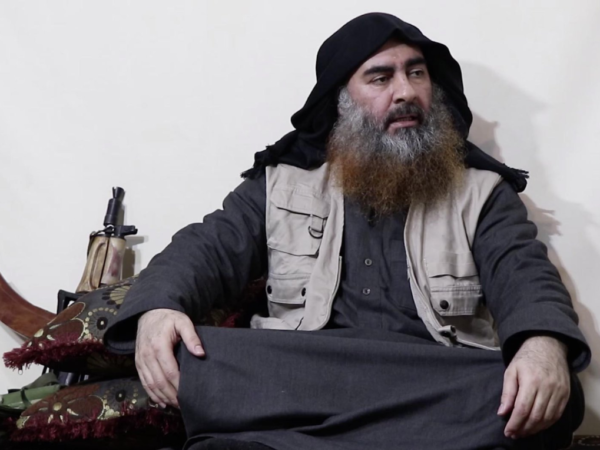 Islamic State leader Abu Bakr al-Baghdadi has been pictured in a new video for the first time since July 2014.

In the video — released by ISIS’s propaganda arm al-Furqan and obtained by SITE Intelligence Group – Baghdadi reportedly claims that his followers died fighting to the end in territories and cities that have been routed by U.S.-backed coalition forces.

He also claims that the Easter Sunday bombings in Sri Lanka were retaliation for ISIS being defeated in their Baghouz, their last stronghold in Syria, and refers to the recent oustings of leaders in Algeria and Sudan, meaning that the video must have been shot within the last week.
Pentagon officials say the Office of the Director of National Intelligence (ODNI) is leading the analyzing of the video.

Col. Scott Rawlinson at Combined Joint Task Force – Operation Inherent Resolve, the group established by the U.S.-led international coalition fighting ISIS, told Fox News: “At this time, we are working to independently corroborate the validity of the video posted today reportedly showing Abu Bakr al Baghdadi. We are continuing to support partner forces in their mission of an enduring defeat of Daesh, which includes the capability to finance their operations, recruit new members, and collaborate to conduct violent extremist attacks.”

Rumors of Baghdadi’s death have persisted in recent months as ISIS militants who have surrendered to the forces believed their ideological leader abandoned their cause. Prior to Monday’s developments, Baghdadi’s most recent call to arms was in a series of audio clips released in August 2018.

“Hopefully we will reach him very soon, especially now that ISIS has been defeated in its final place in Baghouz, Syria and they have lost all their land in Iraq,” Sabah al Namaan, a spokesperson for Iraq’s counterterrorism agency, told Fox News earlier this month. “Now, we have a real opportunity to catch or kill him.

“The latest information is that he is still in the Syrian desert, and could not enter into the Iraqi side because of concerns about evading the security measures on the borders,” he added.

Baghdadi – whose real name is Ibrahim Awwad Ibrahim al-Badri – suffers from diabetes, high blood pressure and injuries sustained during an airstrike years ago. He remains the world’s most wanted man, with the United States continuing to offer up to $25 million for information leading to his location.

Baghdadi’s absence from the public spotlight has been causing deep fissures within the crumbling terrorist organization, which, though eroded, still boasts between 28,000 and 32,000 soldiers, Fox News reported in March.

“He’s hiding somewhere, people were angry,” Mohammed Ali, an ISIS fighter from Canada who was captured by the U.S.-backed Kurdish-dominated Syrian Democratic Forces, told The Sunday Times that month.

Baghdadi, according to Max Abrahms, a terrorism expert at Northeastern University, “has been widely misunderstood in the media.”

“Think tank analysts have often referred to him as a savvy militant group leader, even a mastermind. That’s because he was the leader of the most feared terrorist group in the world,” Abrahms said.

He continued, “Baghdadi endeavored to create the most feared terrorist group by publicly advocating indiscriminate violence against civilians, decentralizing the organization to maximize the civilian bloodshed often by calling on Soldiers of the Caliphate to commit attacks anywhere in the world, and then bragging about them over social media to spread the terror.”

Earlier this year, Iraqi intelligence officials speaking to Fox News maintained he was lurking in Syrian border towns, often donning non-traditional or “regular” clothes, using a civilian car and making sure all those around him had no mobile phones or electronic devices in order to bypass detection.

Baghdadi is believed to have survived a coup effort from within his own ranks in January, when several senior fighters attempted to oust him by leading him from his hideout into a firefight with foreign fighters. But he was reportedly whisked away by his security.

At its peak, the Islamic State ruled a vast swath of ungoverned space across Syria and Iraq, ruling a population of more than eight million people. Baghdadi’s stewardship of the caliphate was crucial to its governance structure, and his lofty jihadist rhetoric provided the inspiration necessary to draw in the hundreds of thousands of foreign fighters who joined the terrorist group.

Without the spiritual and operational direction of Baghdadi, and the Islamic State’s ability to govern, which was a primary driver of its appeal and what set it apart from other terrorist groups such as Al Qaeda, the group’s future remains unknown.

Despite President Trump’s January 2019 declaration that ISIS has been defeated and his announcement that U.S. troops will be gradually withdrawn from Syria, ISIS and the ideology that feeds its hate will continue to be a resilient and formidable threat.