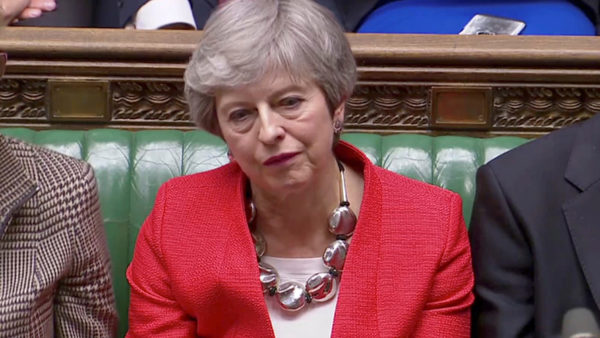 The U.K.’s Brexit deal with the EU has been rejected by U.K. lawmakers in another landmark defeat for British Prime Minister Theresa May.

May’s Brexit deal was defeated for the first time back in January but she had hoped last-ditch tweaks, specifically on the contentious Irish border issue, would help persuade Members of Parliament (MPs) to change their minds.

But her agreement was rejected by 149 votes after 242 MPs voted for the deal and 391 MPs voted against it. This was a smaller defeat than when it was rejected the first time, but the margin still remained significant. Speaking after the result, May said she regretted the decision taken by the House of Commons.

“I continue to believe that by far the best outcome is that the U.K. leaves the EU in an orderly fashion with a deal, and that the deal we have negotiated is the best and indeed the only deal available,” she told lawmakers.

Some 75 of her own Conservative MPs reportedly voted against her deal, compared with 118 who voted against it in January. The 10 MPs of the Democratic Unionist Party — which help to prop up May’s party in government — also voted against the deal, as did the Labour party, the Scottish National Party and other opposition parties.

The deal’s chances were dealt a blow earlier on Tuesday when the government’s chief legal advisor said that the risks to the U.K. from the “Irish backstop” remained unchanged despite recent legal assurances from Brussels — although he did say the risks had been reduced by the tweaks.

The Irish backstop is a mechanism to avoid restoration of the “hard” border between the Republic of Ireland and Northern Ireland that was erased with the 1998 Good Friday peace agreement between London and Dublin. Some U.K. politicians don’t like the fact that the backstop, although intended as a last-resort, would mean the U.K. remaining within a EU customs union for an indefinite amount of time and unable to leave unilaterally, effectively meaning it might be tied to the EU for an unspecified duration.

MPs are now expected to vote Wednesday on whether the U.K. should leave the EU without a deal on March 29, the scheduled departure date. If that option is rejected, as widely expected, MPs are then to vote on whether to delay Brexit which they are expected to support.

The vote on Tuesday evening was arguably the most important vote for Brexit since the 2016 referendum on EU membership. A research team at Citi said that the defeat had dealt a further blow to the chances of an orderly Brexit under May.

“An extension of Article 50 is now almost certain but crucially, Parliament (and the EU) will want to know the purpose. Further negotiations with the EU are unlikely to bring a break-through, so a snap election and further Brexit delays are becoming ever more likely,” the analysts said in a research note.

Samuel Tombs, the chief U.K. economist at Pantheon Macroeconomics, said that his base case scenario remained that MPs would agree on a limited extension of around three months and then will force the prime minister to engage in cross-party talks, leading to an agreement for a Norway-style soft Brexit in the second quarter.

“We still see around a 30 percent chance of a second referendum, either called by Mrs. May or backed by a majority of MPs to break the deadlock, but believe the chances of another election remain slim,” he said in a research note.

Why does the Border matter and what is the backstop?
Why is the Irish Border such a big deal with Brexit?

The 499-kilometre (312 miles)  border running from Carlingford Lough to Lough Foyle will become the only land border between the UK and the European Union after Brexit.

The 1998 Belfast Agreement brought peace to Northern Ireland and removed the need for border checks.

It also established North-South rules and institutions that helped solidify the Peace Process. The border is currently invisible and neither side wants the return of infrastructure along the border or the creation of a hard border.

So what exactly is a hard border?
It is a frontier monitored and protected by customs officials and border inspectors, and potentially police or military personnel if there are security issues around the border.

The general fear is that the return of customs officials or border inspectors would be so unacceptable to people who travel freely across an open border that it would lead to anger and, potentially, violence.

That could in turn lead to a police or military presence along the Border to protect check points. Customs and security posts along the Border were regular targets of republican paramilitaries during the 30-year Troubles.

Why would there be a need for border checks?
Different customs rules, regulations and standards will apply in Northern Ireland and the Republic if the UK is leaving the EU so the different rules could have to be enforced at a border.

What do the EU and UK want along the Border?
Neither party to the Brexit negotiations wants to see the return of a hard border but they cannot agree a plan on how to achieve this.