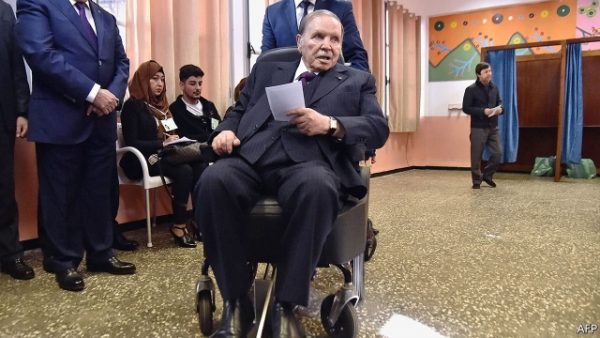 Algerian President Abdelaziz Bouteflika’s campaign chief on Sunday formally submitted his candidacy for re-election. But amid mass protests, the ailing 0ctogenarian vowed in a letter read on state TV to hold early polls, which he would not contest.

Fresh demonstrations erupted in central Algiers and elsewhere in the country following Bouteflika‘s official candidacy announcement, with several hundred young people marching in the streets in the capital.

Bouteflika remains in Switzerland where he has been for a week undergoing what the presidency describes as “routine medical tests”, but there was no legal requirement for him to submit his candidacy in person.

The 82-year-old leader, who suffered a stroke in 2013, vowed in a letter read out on state television to organise a “national conference” after the April 2019 presidential election that would set a date for early polls, which he would not contest.

“I pledge not to be a candidate in that election which will ensure I am succeeded in undeniable conditions of serenity, freedom and transparency,” the letter read.

“I listened and heard the cry from the hearts of protesters and in particular the thousands of young people who questioned me about the future of our homeland”, it said.

The veteran leader uses a wheelchair and has rarely been seen in public since his stroke.

Demonstrators have been taking to the streets to over the past few days in a rare display of public protest in the North African nation. On Friday, mass demonstrations — dubbed “the Million Man March” — drew tens of thousands of protesters across the country.

Chanting “Bouteflika go away”, the students rallied near the main city centre campus of the University of Algiers, which was cordoned off by police, AFP journalists said, while others demonstrated at other campuses.

According to a police toll, 56 police officers and seven demonstrators were hurt and 45 alleged stone-throwers were arrested in Algiers.

Rallies inside and outside campuses in the northeastern city of Annaba also drew hundreds chanting anti-Bouteflika slogans, a local journalist said on condition of anonymity.

The TSA news website reported other protests in Algeria’s second and third cities, Oran and Constantine.

Bouteflika’s announcement in February that he would seek another five-year term despite his failing health has unleashed pent-up frustrations in the North African country.

The presidency has not detailed when he will return from the Geneva hospital.

Alongside Bouteflika, several other candidates have registered, including prominent retired general Ali Ghediri, who was the first to announce he would run and has promised change.

A Sunday editorial in El-Moudjahid newspaper, a government mouthpiece, said protesters would be “disappointed” in their campaign to force Bouteflika to pull out of the April election.

Bouteflika has been in power since 1999, initially gaining respect from many for his role in ending a civil war that officials say killed nearly 200,000 people.

Authorities have warned that the protests risk dragging Algeria into instability, comparing the rallies to those that sparked Syria’s ongoing war.

Protesters have been mobilised by calls on social media, as many young Algerians struggle to find jobs in a country where half the population is under 30.

“Out out,” shouted crowds in the Place de la Republique, central Paris, where protesters waved placards and some wrapped themselves in Algerian flags.