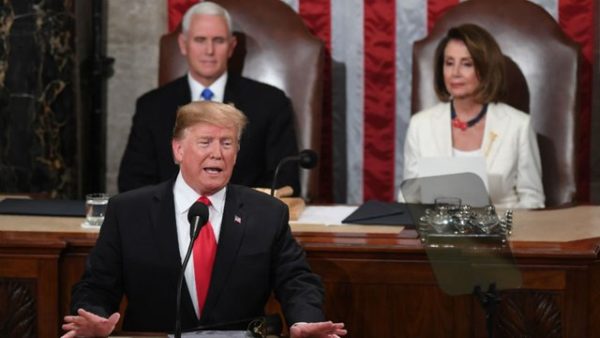 In his second State of the Union address since taking office, US President Donald Trump singled out Iran as the “world’s leading state sponsor of terror” and repeated his pledge to avoid endless wars.

But Mr Trump stopped short of doubling down on declaring the full victory against ISIS as had been expected and he did not give a more fixed timetable for pulling US forces from Syria.

The president struck a more bipartisan tone to last year in a speech that followed the longest government shutdown in US history last month and the Republican loss of the House of Representatives in last November’s election.

On the Middle East, the US President focussed on Iran, the fight against ISIS and withdrawal from Syria without detailing the specifics of his plan.

“My administration has acted decisively to confront the world’s leading state sponsor of terror: the radical regime in Iran,” he said.

“To ensure this corrupt dictatorship never acquires nuclear weapons, I withdrew the United States from the disastrous Iran nuclear deal. And last fall, we put in place the toughest sanctions ever imposed on a country,” Mr Trump said.

The White House is readying to host a conference in Warsaw next week to discuss increasing pressure on Tehran.

“We will not avert our eyes from a regime that chants death to America and threatens genocide against the Jewish people,” he said to applause from lawmakers.

The president laid out his Middle East strategy – or without saying so specifically, his policy towards Israel and Palestine – as one of “principled realism, not discredited theories that have failed for decades to yield progress.

“My Administration recognized the true capital of Israel – and proudly opened the American Embassy in Jerusalem,” he said.

Criticizing long drawn-out wars, Mr Trump complained about spending more than $7 trillion in the Middle East. “As a candidate for President, I pledged a new approach. Great nations do not fight endless wars” he said.

But Mr Trump was widely expected to reiterate his claim that the US had defeated ISIS and detail a timeline for withdrawal from Syria.

Mr Trump’s December announcement that the campaign in Syria was completed came as a shock to both US allies and his own officials. It led both Defence Secretary Jim Mattis and the US’s top envoy to international anti-ISIS coalition, Brett McGurk, to resign.

“When I took office, ISIS controlled more than 20,000 square miles in Iraq and Syria. Today, we have liberated virtually all of that territory from the grip of these bloodthirsty killers” he said.

“Now, as we work with our allies to destroy the remnants of ISIS, it is time to give our brave warriors in Syria a warm welcome home.”

Nobel Peace Prize winner Nadia Murad, a Yazidi activist and survivor of genocide, and Syrian Kurdish leader Ilham Ahmed were both in the audience.

On America’s longest war, Mr Trump said he has “accelerated our negotiations to reach a political settlement in Afghanistan.” He highlighted the US “constructive talks with a number of Afghan groups, including the Taliban.

“We do not know whether we will achieve an agreement – but we do know that after two decades of war, the hour has come to at least try for peace” he added.

Turning to Russia, he defended his decision to withdraw from the Intermediate-Range Nuclear Forces Treaty on missiles. “Decades ago, the United States entered into a treaty with Russia in which we agreed to limit and reduce our missile capabilities.”

He added “while we followed the agreement to the letter, Russia repeatedly violated its terms… Perhaps we can negotiate a different agreement, adding China and others, or perhaps we can’t.”

The area in which the president gave the most concrete plans was over talks with North Korea.

He said he and Kim Jong-Un would meet for a second summit. “Chairman Kim and I will meet again on February 27 and 28 in Vietnam” Mr Trump said.

On his signature negotiations with North Korea, Mr Trump said “our hostages have come home, nuclear testing has stopped and there has not been a missile launch in 15 months.

“Much work remains to be done, but my relationship with Kim Jong Un is a good one.”

On Venezuela the US has condemned President Nicolas Maduro, called for him to step down and backed National Assembly head Juan Guaido as new interim President.

“We stand with the Venezuelan people in their noble quest for freedom – and we condemn the brutality of the Maduro regime.”

Domestically, Mr Trump touted “an unprecedented economic boom” with a drop in unemployment and rise in wages during his first two years. He urged the new Democratic House to work with him, as another shutdown looms if no funding is provided for his flagship border wall with Mexico in the coming weeks.

He repeated his defence of the wall and stronger border security and called for “reversing decades of calamitous trade policies” and uniting to rebuild “America’s crumbling infrastructure.”

With concern over how the new Congress will handle Mr Trump given the broad powers to demand investigations into the president, he delivered a rhyming warning. “If there is going to be peace and legislation there cannot be war and investigation” he cautioned.

Mr Trump will make further remarks on the fight against ISIS on Wednesday afternoon as members of the global coalition against ISIS meets in Washington for the first time in seven months.