“As long as there is sectarianism, Lebanon will not thrive ” 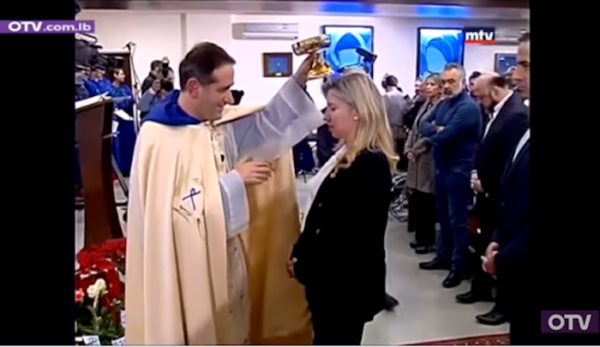 A Lebanese Sunni Muslim lawmaker attended a New Year’s mass at a Maronite Catholic church, a common courtesy among the country’s 18 religious sects. Then as the television cameras rolled, she approached the priest and received a blessing — without communion.

Meant as a gesture of tolerance, the event quickly turned into a vicious social-media brawl fueled by the entrenched sectarianism that impedes Lebanon’s progress three decades after its civil war ended. Eight months on from an election, it remains without a government and with billions of dollars in aid untapped as tensions fester. The worsening economy and delay in forming an administration triggered strike action by some workers on Friday.

Some praised Rola Tabsh, a member of Prime Minister-designate Saad Hariri’s party, for joining the “peace and love” mass held Jan. 1 in Antelias, a town north of Beirut. Others blasted her for betraying her faith.

Tabsh at first expressed surprise at the criticism, saying she wasn’t the first Muslim to enter a church and that showing respect for others’ rituals doesn’t negate an individual’s faith. But that didn’t silence her opponents. So she then visited Dar al-Fatwa, the highest Sunni authority, where she was photographed listening attentively, a white scarf draped over her blond hair, to an explanation of Islamic principles.

The lawmaker said in a statement she’d confirmed her commitment to Islam and apologized to Allah — triggering another wave of criticism from those who supported her church visit.

“You’re apologizing because you entered one of (Allah’s) homes?” Dima Sadek, a news anchor and political show host, wrote on Twitter. “I still can’t believe that there’s someone in my country who would publicly apologize for going into a church.”

Christians, Sunnis and Shiites each make up roughly a third of Lebanon’s population, and the Taif accord that ended the 1975-1990 war stipulated equal representation between Christians and Muslims.

— With assistance by Dana Khraiche