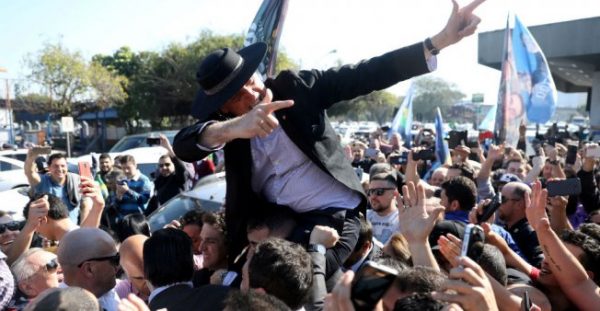 Jair Bolsonaro’s victory in Brazil’s presidential runoff on Sunday places a man nostalgic for military dictatorship, with a history of misogynist, racist and homophobic comments, at the helm of Latin America’s largest democracy.

The extraordinary chain of events that brought a bile-spewing, dictatorship-loving maverick to Brazil’s highest office began over two years ago, with the removal of the country’s first female president. Crippled by her party’s corruption scandals, and unable to offset Brazil’s worst-ever recession, Dilma Rousseff was ousted following a controversial impeachment process in 2016. As he cast his ballot in favour of her eviction, Jair Bolsonaro, then a fringe lawmaker known only for his slurs aimed at women and minorities, offered a sinister tribute.

“In memory of Carlos Alberto Brilhante Ustra, the dread of Dilma Rousseff, […] I vote yes,” said the far-right congressman, referring to the notorious commander of a police unit that murdered and tortured scores of people – including Rousseff – during Brazil’s 1964-1985 military dictatorship.

Rousseff’s impeachment for “budgetary violations” had no direct link to the sweeping corruption investigations ensnaring her Workers Party (PT) and a host of other outfits. By conflating the two issues, her many opponents in Congress were hoping to destroy the left-wing party that had been in power since 2003. Little did they know the process they had set in motion would scupper Brazil’s political class as a whole, paving the way for the rise of a man who has spent a lifetime pillorying Brazilian

A former army captain with an undistinguished career in Brazil’s Congress, Bolsonaro has promised to restore military-style law and order, name army men in top positions, and rewrite the history books on Brazil’s dictatorship. It’s no wonder The Economist has said his victory will “put the very survival of democracy in [Brazil] at risk”.

Bolsonaro’s supporters have accused Western critics of obsessing over his racist, misogynist and homophobic rants while ignoring the factors that carried his unlikely bid for the presidency. Brazil is still reeling from its worst recession in decades; drug and crime-related violence has surged, setting a bleak record of 64,000 murders last year; and Brazilians are furious at the extraordinary scale of corruption uncovered by a sprawling bribery investigation that jailed the former hero-president Luiz Inacio Lula da Silva and tainted politicians across the board – leaving Bolsonaro untouched.

Unsurprisingly, much of the public’s anger has been aimed at the Workers Party, which held power between 2003 and 2016. Opposition to the PT – known as antipetismo – has been described as Brazil’s “largest party”. It proved fatal to its presidential candidate, former Sao Paulo mayor Fernando Haddad, accounting for a sizeable share of Bolsonaro’s vote.

With Brazilians desperate for change, Bolsonaro rode the wave of voter anger, mirroring an anti-establishment pitch that has upended democracies around the world. In a now-familiar ploy used by hard-right populists from Washington to Rome, his rhetoric emphasised the importance of the “people” over the “elites”. A darling of religious conservatives, he has used his middle name – Messias – to cast himself as the country’s saviour. That messianic pitch got a boost when, just over a month from the vote, he survived a knife attack during a campaign rally.

“You have just elected my father,” his son Flavio declared the following day.

‘Purging’ criminals and the left

Coming just days after a court definitively ruled Lula – then the frontunner – out of the election, Bolsonaro’s stabbing made him the talk of the campaign. His convalescence allowed him to shirk interviews with journalists and televised debates, and focus on a web-based campaign that outmaneuvered his rivals. The trademark vulgarity that had long confined him to the margins of Brazilian politics proved ideally suited to social media, as did the simple solutions he offered to complex problems – such as arming “good people” to face down criminals. To many, his political incorrectness came across as refreshing and proof that he would shake things up.

Brazil’s self-proclaimed Messiah is in fact a political old-timer who has sat in Congress for the past 27 years, authoring just two bills over seven successive terms. Bolsonaro’s only noticeable record is the list of offensive comments he has aimed at women and minorities: he has said he would rather have a dead son than a gay one, told a congresswoman she didn’t “deserve” to be raped by him, and said people who live in settlements founded by escaped slaves are “not even good to procreate”.

The 63-year-old’s statements suggest he has very little respect for the rule of law and the rights of minorities in a diverse nation of 209 million. He has said the answer to gun violence is to give law-abiding citizens bigger guns. Criminals should not be treated as “normal human beings”, he told supporters in August, adding that police officers should put “10, 15 or 30 bullets” into suspects and then be decorated for doing so.

“We are going to gun down all these Workers Party supporters,” he shouted at a later rally, using a tripod to mimic shooting a rifle. Any suggestion he might tone down his rhetoric as he neared power was confounded ahead of the presidential runoff when he pledged to “purge” Brazil of his left-wing foes.

Back to the junta?

Bolsonaro has openly confessed his ignorance of economic policy, placing his faith in his star advisor and pick for economy minister Paulo Guedes. The US-educated liberal economist wants to privatise Brazilian state-run companies, slash public spending and overhaul the pension system, stances that explain business support for the far-right candidate and the market euphoria that greeted his first-round win.

Perhaps even more decisive was the backing Bolsonaro enjoyed among evangelical voters, who account for up to a quarter of the electorate. They proved to be a soft target for the “fake news” spread by his social media campaign, most notably the preposterous claim that Haddad planned to distribute “gay kits” in primary schools instructing teachers to encourage homosexuality. Bolsonaro’s own pick for education minister, former general Alessio Ribeiro Souto, wants creationism to be taught in schools. He has also said school history books should call the 1964-85 junta a movement to fight communism rather than a dictatorship.

Alarmingly for Brazil’s still youthful democracy, Souto is just one of several former army men whom Bolsonaro is expected to name in his future cabinet. Over the past year, a dozen retired generals have been holding weekly meetings in a hotel in Brasilia hashing out a strategy to carry their man to the presidency. They include his vice-presidential running mate, recently retired army general Hamilton Mourao, who has suggested tearing up and rewriting Brazil’s constitution. In one of several outrageous comments made during the campaign, Mourao has blamed the country’s woes on the “indolence” inherited from indigenous communities and the “deceit” introduced by African immigration – by which he presumably meant slavery.

Meanwhile, environment campaigners have warned that Bolsonaro’s likely transport minister Oswaldo Ferreira, another retired general who spent much of his career building roads and bridges through the Amazon forest, will cause severe damage to indigenous communities and the country’s exceptional biodiversity.

Such is the opprobrium heaped on politicians that many Brazilian voters appear willing to let the army have a go at fixing the country’s problems. Tellingly, a total of 73 current or former members of the security forces were elected to the two-chamber Congress earlier this month, up from 18 in the previous congressional election, according to the local news website G1.

“Bolsonaro thrives on the notion that politicians are all corrupt, are all incompetent, and therefore the military is the solution,” Alfredo Saad-Filho, a professor of political economy at SOAS London, toldFRANCE 24’s Debate show. “What is going to happen, likely, under a Bolsonaro administration is the dragging of the army into politics, into corruption scandals, and its transformation into another gang.”