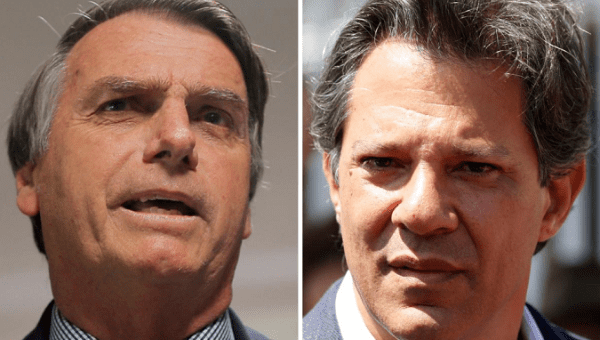 According to Opinion Polls Bolsonaro still leads Haddad but he he could still lose in the Runoff
Share:

The former army captain heads into this weekend’s second round with a seemingly unbeatable lead in opinion polls, the latest of which by Ibope showed him leading Haddad by 57 percent to 43.

“He can get there by fraud, but through the vote he won’t make it. I’m sure of that,” Bolsonaro, 63, said in a video posted to Facebook late Wednesday.

He also suggested Haddad’s Workers Party may be trying to “manipulate Ibope’s numbers” and warned his supporters to remain “wary” of the opinion polls.

Bolsonaro’s suspicions were piqued by Ibope’s poll published Tuesday, which said Haddad had cut his opponent’s lead from 18 to 14 points.

Yet Bolsonaro pointed to the October 7 first round results from Brazil’s biggest city, where Haddad garnered only 19 percent compared to the former’s 44.

Overall, Bolsonaro had polled 46 percent to Haddad’s 29, only narrowly missing out on outright victory at that time.

It’s not the first time he’s brought up the possibility of fraud, having done so 10 days before the first round of voting, before subsequently backtracking.

However, when the results were announced, he then denounced “problems” with the electronic urns and blamed them for denying him an absolute majority.