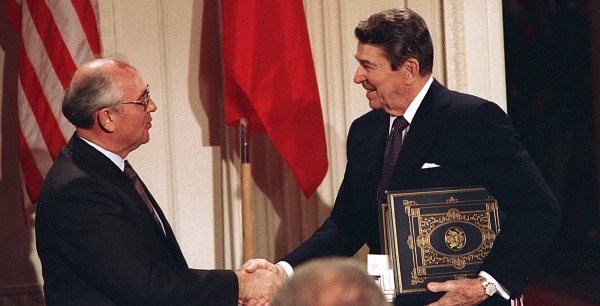 The Intermediate-Range Nuclear Forces Treaty (INF Treaty, formally Treaty Between the United States of America and the Union of Soviet Socialist Republics on the Elimination of Their Intermediate-Range and Shorter-Range Missiles) is a 1987 arms control agreement between the United States and the Soviet Union (and later its successor states, in particular the Russian Federation). Signed in Washington, D.C. by President Ronald Reagan and General Secretary Mikhail Gorbachev on 8 December 1987
Share:

President Donald Trump said on Saturday the United States will exit the Cold-War era Intermediate-Range Nuclear Forces Treaty that eliminated a class of nuclear weapons, in a move that is likely to upset Russia.

The INF treaty, negotiated by then-President Ronald Reagan and Soviet leader Mikhail Gorbachev and ratified by the U.S. Senate in 1988, required elimination of short-range and intermediate-range nuclear and conventional missiles by both countries.

Washington believes Moscow is developing and has deployed a ground-launched system in breach of the INF treaty that could allow Moscow to launch a nuclear strike on Europe at short notice. Russia has consistently denied any such violation.

Trump said the United States will develop the weapons unless Russia and China agree to a halt on development.

China is not a party to the treaty and has invested heavily in conventional missiles as part of an anti-access/area denial strategy, while the INF has banned U.S possession of ground- launched ballistic missiles or cruise missiles of ranges between 500 and 5,500 km (311 and 3,418 miles).