JBEIL, Lebanon – In Lebanon, an ancient coastal city has made an ambitious decision to ban single-use plastic bags by the end of 2018. The goal is to decrease plastic consumption and address the country’s larger chronic waste crisis better.

“Honestly, this has been on my mind for a while,” Wissam Zaarour, mayor of Byblos, tells Middle East Eye.

In a memo circulated in mid-July, the mayor informed the public that plastic bags were to be phased out by 31 December 2018. The plan stipulates “the use of eco-friendly bags made of recycled paper or fabric” instead, according to the memo.

No information, however, was provided about penalties for those who do not comply. Speaking to MEE, Zaarour says such plans are still in the works.

“I was in Athens three years ago participating in a seminar about marine pollution. I learned that a plastic bag needs around 30 years or more to degrade in the sea. On land, it takes even longer. That’s when I made the decision that we need to phase these bags out.”

“Byblos, a quaint and historical city, previously frequented by American icon Marlon Brando, enjoys incoming wealth as a major tourist destination in Lebanon and the Middle East; while it’s not abnormal to spot areas lightly littered with plastic bottles and bags, its main downtown area is well-kept, save the trash floating atop the port’s waters.

Lebanon has been struggling to manage its garbage for decades. While waste management laws have been drafted in the past, none have received final approval from parliament. Accordingly, recycling is largely a pipe-dream in a country with no infrastructural or strategic support.

In 2015, the capital was overrun with uncollected garbage after a dump was closed. Residents of Beirut and surrounding areas took to the streets in the thousands protesting against the government’s failed policies, under the slogan “You Stink.” 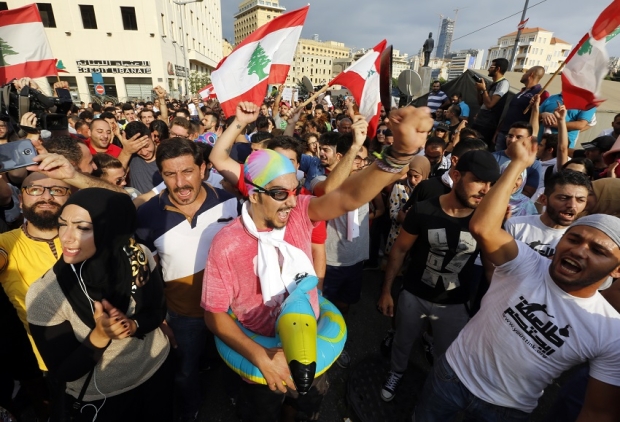 Lebanese protesters hold their national flags and shout slogans during a demonstration, organised by the “You Stink” campaign, against the ongoing trash crisis in the capital Beirut, on 22 August 2015 (AFP)

The protests were halted after the state blasted peaceful demonstrators with tear gas, water cannons, and rubber bullets.

While protests of the same magnitude have yet to resurge, smaller incidents have sporadically taken place. In June, protests broke out in south Lebanon’s city of Sidon, when an over capacitated waste-management facility diffused extensive odours.

On the other hand, the port city that is located 40 kilometres north of Beirut, fared better in managing its waste collection and avoided a similar catastrophe in 2015.

Still, like the rest of the country, the city’s efforts in waste management have not gone without its challenges.

The garbage crisis in Lebanon demonstrates very clearly how those in power have weakened state institutions for the benefit of parallel businesses they have either founded or gained from.

While Zaarour may not be able to change this on a national level, “I’m only a mayor,” he jokes, the upcoming ban on plastic bags is one way to tackle the issue.

Locals, however, who are wary of the country’s political apathy and absence of proper management, feel that the ban will not be upheld. Plus, locals say, they love plastic.

“I think this is a really good idea, but it won’t be easy,” he says.

“People are used to using plastic bags for everything, it’s just part of our culture, but if this works, then it would be great for everyone, for the world. All the plastic garbage we create, you can always see it floating on the sea, or thrown on the streets.”

Eavesdropping on the conversation, a passer-by calls the decision nothing more than words on paper.

“In Lebanon, we’ve been living in worsening conditions for decades. We don’t even have 24-hour electricity. People throw their trash in the streets. How would it be possible to ban plastic bags?” – he interjects before running off.

Therese Francis, owner of a general store half a kilometre away, likens the initiative to a “dream”.

Standing behind the counter, she sighs, confessing she has little faith that the community will cooperate.

Touching upon Lebanon’s rampant and illegal quarrying, river pollution and waste burning in the past few years, the store-owner has nearly given up on seeing her country free of environmental destruction.

“Our poor Lebanon,” Francis says shaking her head. “The things that we have done to destroy it.”

Admittingly, the store owner has not given much thought about what she will do if the ban is indeed enforced. For now, she says, the store will continue to dispense its current stock of plastic bags. When they are depleted, Francis will decide whether she needs to make the switch.

Dounia Najem, another store owner who has recently learned about biodegradable bags, expressed concerns that alternatives will be too pricey for her. While she too supports the decisions, the possible effects on her business have left her worried.

Praising Jbeil’s decision, environmental groups have already begun approaching the mayor to discuss how best to phase plastic bags out of the community. Joslin Kehdy, founder of local environmental NGO Recycle Lebanon was the first to meet Zaarour and discus the need to enforce a binding law and support businesses by offering real alternatives.

According to Kehdy, not all “biodegradable” bags can be considered eco-friendly. While they do have a shorter lifespan on earth, they degrade into microplastic, which is harmful to marine life. Accordingly, plans are in the works to look into other options such as compostable bags, which are more costly as none are readily available wholesale in Lebanon. Depending on the brand and size, business owners could pay at least twice as much for the eco-friendly option compared to the average plastic bag.

Nevertheless, she argues, the long-term payoff for the environment is worth it, and with a larger market, prices have the potential to decrease.

In order to increase awareness, Kehdy has also begun planning to approach local businesses and supermarkets with presentations.

Sammy Kayed, co-founder of the burgeoning initiative UNCLOG, which aims to reduce consumption of disposable plastic bags, has faith that the community will be more receptive to change. Like Kehdy, Kayed believes that if given the right incentives, the decision to ban plastic bags could be successful.

“It’s hard here because we don’t really have strong enforcement and many laws in the country aren’t taken seriously,” Kayed, who has also met the mayor, says.

“But Lebanon does respond well to pride and financial incentives. Transition in business can happen if we can just show how alternative ways of producing and consuming can actually be more valuable than the one we have become accustomed to.”

For example, he says, the payoff of clean shores could have an immense impact on increased tourism.

“There are a great deal of wonderful studies on how improving environmental quality can actually deliver more social mobility, social equality, and financial returns.”

Glimmers of hope in Beirut

Local NGOs like Recycle Lebanon and Greenpeace Mediterranean have pushed for the refusal of single-use plastics altogether with their respective #BalaPlastic and #Plastacna campaigns both under two years old.

The majority of their success is found in the country’s capital. Major Beirut nightlife and hospitality venues including The Grand Factory, Vyvyan’s and Kissproof have already vowed to drop their use of plastic straws – a marine pollutant that is endangering aquatic life.

“We decided to invent the word ‘plastacna’. In the Lebanese dialect, it translates to ‘we are plastic’ because here, we are literally transforming into plastic with our consumption,” Julien Jreissati, Arab world campaigner working on the on-going initiative at Greenpeace Mediterranean tells MEE.

“After approaching establishments [several months ago], over a dozen have already agreed to drop the use of straws and other single-use plastic items. The awareness is growing, and people are responding positively.”

Jreissati acknowledges the imbalance of engagement across the country,

“We’re doing really well in Beirut, it’s becoming popular,” he says, “but the real challenge is making this spread across the country.”

Nevertheless, Jreissati, Kehdy and Kayed persist – some of Lebanon’s young eco-warriors – advocating more sustainable lifestyles for the future of the country.

“I love Lebanon, and seeing it in this state is so frustrating,” Jreissati says. “There is such unique beauty we have to work to preserve here, and over the world.”