Europe faces hottest day ever as temperatures soar to 48C 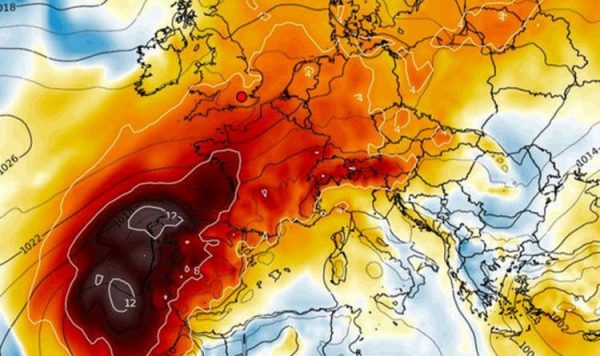 Portugal’s Met Office has retracted its 50C (122F) predictions — the hottest ever on mainland Europe — drastically revising the forecast down
Share:

Met Office forecaster John Hammond said of the European heatwave: ‘Hell is a place on earth as Iberia heats up.’ At least three people have died as a result of the extreme weather. Eight areas in Portugal have already broken the local temperature records due to the Iberian Plume. Met Office forecaster Seven Keates said: ‘The European temperature record could be broken, with highs in Portugal and Spain around 48C on Saturday, and Sunday will also be very hot.

‘More of the hot air around Portugal is coming to Britain via the Bay of Biscay, with 30C at the weekend, Monday at 31C, and Tuesday having an upper temperature boundary of 34C.’ Met Office forecaster Bonnie Diamond added: ‘The intensity and duration of the heat in Spain and Portugal will likely have impacts on tourists, who may not be acclimatised to such high temperatures.’ The next few days could see the hottest temperatures recorded in continental Europe. In Spain, extreme risk warnings were issued for 41 of the country’s 50 provinces due to the hot weather.

Temperatures in southwest France could also rise to the high 30s. The mercury is being driven higher by a hot air mass moving north from Africa, bringing dust from the Sahara Desert.

On Thursday, temperatures reached 45.2C near Abrantes, Portugal. Medical staff and firefighters are on standby until the end of the weekend. British holidaymakers have been urged to keep hydrated and use plenty of sun cream.

A spokesman for the travel trade association Abta advised: ‘We would advise any tourists setting off to the Iberian peninsula, or anywhere else this weekend where they may experience high temperatures, to take a lead from the locals and avoid spending time in the sun during the hottest part of the day, drink lots of water and apply plenty of sun cream. ‘If you go to the beach, go early and when it feels like it’s getting too hot leave, just as the locals do, and go and have a nice lunch in the shade. The reason they do this is because they know how powerful the sun can get in the hottest part of the day and they do everything they can to avoid it.’

It comes as another blast of hot weather returns to parts of the UK. Met Office meteorologist Alex Burkill said the mercury is likely to reach the high 20s and low 30s again, adding that despite the more comfortable temperatures in recent days ‘it is not the end of the hot weather for the summer’.

Temperatures could climb back up to 31C in London this weekend, with sunshine returning to most of the country. Southwark Council said it was suspending the use of barbecues in Burgess Park, south London, after London Fire Brigade warned people to take extra care during the hot weather. The north of England, Scotland and Northern Ireland will enjoy temperatures in the mid-20s, with scatterings of rain. The heat is likely to continue into next week.