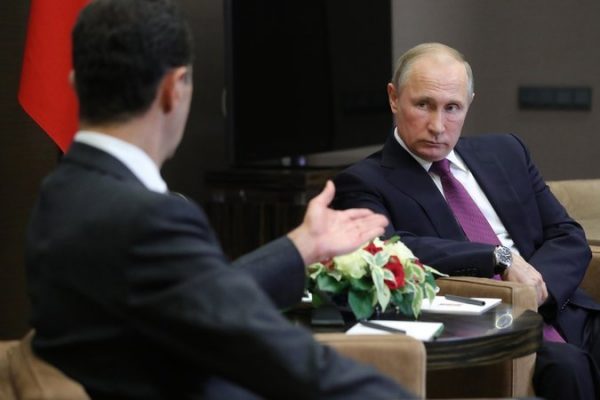 But Mr. Assad cut the Russian off, asking why, with the Syrian government so close to victory, a political solution was necessary at all, according to a senior Arab diplomat who was briefed on the meeting.

Nearly two and a half years after he intervened militarily to prop up Mr. Assad, President Vladimir V. Putin of Russia finds himself stuck in Syria, not quite able to find a solution despite having declared “mission accomplished” on at least three occasions. While Mr. Putin’s military intervention established the Kremlin as a major player in the Middle East for the first time in decades, extricating Russia from Syria is proving far more difficult than he envisaged.

The problem is that Moscow has effectively tied its fortunes to those of Mr. Assad, with limited room to maneuver.

Mr. Putin can neither withdraw nor push real political change in Syria without risking the collapse of the Assad government, which would jeopardize both the effort to diminish American influence in the region and Mr. Putin’s own prestige. Mr. Assad, well aware of his leverage, resists Russian attempts toward compromise with the Syrian opposition.

In that unhappy equilibrium, the war drags on with unknown consequences for Moscow. As the most powerful outside actor, Russia is increasingly blamed for the misery visited on Syrian civilians.

On Tuesday, United Nations investigators released a report that for the first time linked the Russian Air Force to a possible war crime, when a military fighter jet executed a series of attacks in November on the town of Al Atarib, west of Aleppo, killing at least 84 people and wounding more than 150.

Throughout Syria, the volatile mix of forces — including Russian mercenaries whose fate is causing headaches at home — risks amplifying the violence and deepening Russia’s involvement.

At the same time, a developing competition with Iran over reconstruction contracts risks eroding their alliance.

The differences with Damascus were starkly evident at a Middle East conclave in Moscow in late February.

Sergey V. Lavrov, the foreign minister, opened a two-day meeting at the Valdai Discussion Club, perhaps Russia’s most prestigious international foreign policy forum, with a rosy assessment of the Russian-led effort to unite the fractious Syrian parties in negotiations to end the war. The Syrian government expressed zero interest.

In a speech, one of Mr. Assad’s closest advisers, Bouthaina Shaaban, omitted all mention of a negotiated settlement. Instead, she said repeatedly that Damascus would soon declare a “final victory” that she said had been delayed by American and Turkish aid to the opposition.

Russia expressed overt frustration. Even the Valdai position paper put out beforehand chided the Syrian position, saying that “part of the government elite may have greater hopes for military victory than the dividends that negotiations would eventually pay.”

“This military victory is an illusion; you cannot win this battle,” said Vitaly V. Naumkin, the director of the Institute of Oriental Studies at the Russian Academy of Sciences and a trusted Russian government adviser on Middle East matters.

In Moscow, Middle East experts and military analysts noted that divisions within the Russian government, particularly within the Ministry of Defense, contribute to the gap between Russia and Syria.

A dovish faction wants to pocket the military’s enhanced prestige and get out, seeing the defeat of the Islamic State militant group last year as a missed exit. The more hawkish sorts see advantages for Russia in Syria’s remaining an open wound.

On the professional level, officers are rotated in every three months, gaining battlefield experience, promotions and higher pay. The conflict has also provided a showcase for Russian weapons, the country’s most important export after oil.

Russia is also wrestling to contain differences with Iran and Turkey.

Strategically, Moscow and Tehran see eye to eye in terms of preserving the existing Syrian government. They maintain a symbiotic military relationship as well, with Russia owning the skies while Iran fields around 60,000 fighters who form the spine of the regime’s ground forces.

Yet cracks are appearing, as the reconstruction era beckons somewhere on the horizon. Important sectors of the economy need to be rebuilt, particularly oil and gas exploitation, phosphates, power plants, a new harbor and a third cellphone carrier.

Iran thought it had locked up significant projects with a series of memorandums signed in early 2017. But no firm contracts materialized, said Jihad Yazigi, the Beirut-based editor of The Syria Report.

Dmitri O. Rogozin, a deputy Russian prime minister, clawed some of them back during a December visit, according to the senior Arab diplomat, who would speak only anonymously, following diplomatic protocol. Publicly, Mr. Rogozin announced that Russia had won exclusive control over the oil sector, which had previously been developed by Western firms.

Complaints from both countries suggest that matters remain in flux.

Noting that Russia had already obtained political, military and economic concessions, Rahim Safavi, a senior adviser to Ayatollah Ali Khamenei of Iran said recently that Syria could repay the costs incurred by Iran through cooperation in its oil, gas and phosphate sectors, the Iranian news agency ISNA reported.

Yet the Russian envoy who attended the meeting with Mr. Assad, Mr. Rogozin, also said that the Russian people expected some return for their sacrifices and called Syria “an infinitely rich country.”

Despite their demands, however, neither Russia nor Iran can afford rebuilding costs that Syria has estimated at more than $200 billion. Instead, both seem to want to act as agents for private firms or other countries.

Most Arab and Western players have hinged any investment on political reconciliation. China, too, is holding back.

Russia insists that a political dialogue is alive, experts said, partly because it needs one to sway the European Union and other rich donors. “The Americans, the Gulf and the E.U. have all conditioned the reconstruction on a meaningful political process, which the Russians cannot deliver from Bashar,” said Vladimir Frolov, a foreign-policy analyst. “So the Russians are trying to use a P.R. campaign to make it look like a real, Syrian-led, indigenous constitutional process while it is basically fake. Bashar is not going to negotiate himself out of power.”

The ghost of Afghanistan — which became a military quagmire for the Soviet Union in the 1980s and helped speed its collapse — hangs over Syria. Yet the level of Russian commitment is far lower, in money and loss of life, less visible at home and so far not an issue with average Russians.

Ultimately, analysts say, the Kremlin will have to deal with Washington, whose coalition forces control about one-third of the country, including most of the oil wealth. Many experts believe that some form of Russian-American dialogue that ropes in the rest of the outside players is the only hope to end the conflict.

By sticking around, Russia expects to eventually hammer out some peace agreement with Washington that will cement the Kremlin’s enhanced role in the Middle East.

However, the wait carries the risk that Russia could be dragged deeper into the conflict by an unexpected spark along any one of several tense battlefronts: in the north, between Turkey and its longtime Kurdish foes; in eastern Syria, between Syrian government troops backed by Russian mercenaries and American-allied forces; and along Israel’s border with Lebanon and Syria near the Golan Heights, the site of a recent confrontation between Iran and Israel.

“Maybe the Russian government thought that when it destroyed Daesh the war would be over, that it would end the violence and provide the means to a political solution,” said Boris V. Dolgov, a Middle East expert at the Russian Academy of Sciences, using the Arabic acronym for the Islamic State. “The reality is not like this.”