Lebanese president was assured of Kuwaiti support during his official visit 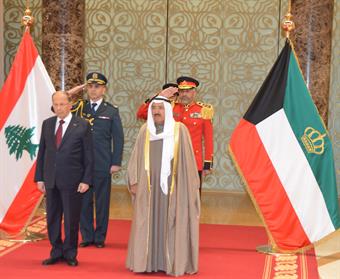 Lebanese President Michel Aoun arrived in Kuwait on Tuesday for an official visit.

The “positive” visit, with talks on bilateral issues, was “an achievement in itself”, said Lebanon’s Minister of State for Administrative Reform Inaya Ezzeddine, speaking at a reception for the Lebanese community in Kuwait City.

“The Emir of Kuwait expressed his readiness during the bilateral talks to support Lebanon on all issues, and for Kuwait to back Lebanon in the region,” she said.

The delegation met with the Kuwaiti Fund for Arab Economic Development, which Ezzeddine said she hoped would bear fruit for Lebanon’s revitalization plans.

“This government is in the process of developing new economic and development visions and God willing we will secure ways to finance them,” she said, adding that Lebanon was working to finalize financial studies ahead of a planned support conference in Paris.

Kuwait, for its part, has increasingly emerged as a regional force of moderation, taking on mediation of the Gulf political crisis.

Aoun and his accompanying  delegation  left  Kuwait on Wednesday.  They were seen off  by the Emir of Kuwait , the Crown Prince the  PM, the parliament speaker and several top officials.