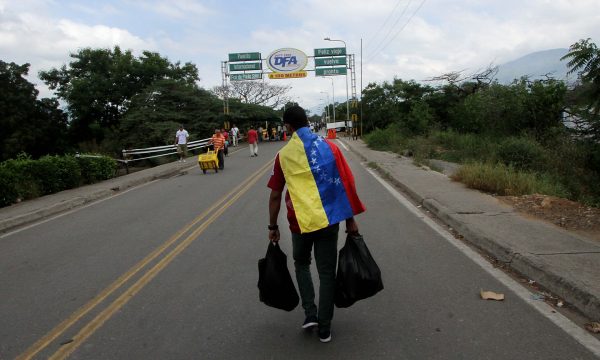 LIMA, Peru —  It is 8 a.m. and the line of Venezuelan refugees outside the Interpol office already stretches to the end of the block.

Most have just arrived in Lima with not much more than the clothes on their back and are here applying for a certificate to show they have no criminal record, a requirement for a work permit in Peru.

“Leaving was tough, but staying would have been tougher,” said Andrea Sequiera, 29, as she waits at the back of the line with her husband Luis, 31, and 8-year-old son Fabian. ”We know lots of people who would like to get out of Venezuela but can’t afford the ticket.”

Although Venezuelans for years have been fleeing the “socialist revolution” first launched by the late Hugo Chávez in 1999, in recent months the trickle has turned into a flood as living conditions become ever more dire — from hyperinflation to acute shortages of food and medicine to one of the worst homicide rates in the world.

In response to protests over the once-wealthy country’s seeming demise, President Nicolás Maduro’s increasingly authoritarian regime has cracked down on opponents, making prospects for improved times less and less likely.

While many exiles had fled to the United States, surging numbers, like the Sequieras, now head to other Latin American nations. The change probably stems from President Trump’s tough anti-immigration stance and the fact that fewer Venezuelans can afford the airfare.

From Mexico to Argentina, immigration agencies are reporting skyrocketing numbers of Venezuelan arrivals, doubling and even tripling the total for previous years.