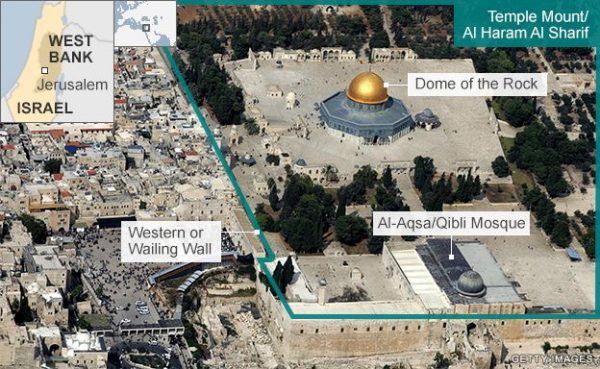 Three Palestinians have been killed during clashes with Israeli security forces in occupied  East Jerusalem and the West Bank, Palestinian officials say.

Hundreds were injured in the violence, after days of friction over a Jerusalem holy site boiled over.

Palestinian president Mahmoud Abbas said he was freezing all contacts with Israel amid unrest at the site.

Tensions have soared since two Israeli policemen were killed a week ago.

Three Israeli Arab gunmen shot the officers near the holy site known to Muslims as Haram al-Sharif and to Jews as the Temple Mount. The gunmen were shot dead after being pursued on to the site.

In a separate incident on Friday, three Israelis were stabbed to death after an assailant entered a home in a West Bank settlement.

Another Israeli was wounded in the attack in Halamish (also known as Neve Tsuf), near Ramallah.

Thousands of police were deployed around the Jerusalem compound on Friday morning, and Palestinian men under the age of 50 were barred from entering the Old City – a measure which is sometimes taken to try to prevent violent protests at the holy site.

Police said they fired tear gas to disperse Palestinians who threw stones and tried to break through a police barricade in the street outside.

The Palestinian health ministry said a 17-year-old Palestinian youth had been shot dead in a neighbourhood nearby. It did not specify who was behind the shooting in the Ras al-Amud area.

A second man died after being seriously wounded in Friday’s clashes in A-Tur in East Jerusalem.

The Palestinian health ministry later said a third man had been killed after being shot in the chest in Abu Dis in the West Bank.

Clashes also erupted in other parts of East Jerusalem, at the Qalandia checkpoint between Ramallah and Jerusalem, and at the northern entrance of Bethlehem.

The Palestinian Red Crescent said nearly 400 Palestinians had been hurt, with 92 people taken to hospital.

An Israeli police spokesman said four officers had been injured.

In the wake of the killing of the police last Friday, Israel installed metal detectors at entrances to the holy site. The move, however, drew an angry reaction from Palestinian and Islamic leaders who say it is a violation of the status quo.

President Abbas, in a speech, said his suspension of contacts with Israel would last until the security measures were lifted and the metal detectors removed.

Israel says the measure is necessary for security after the weapons used to kill the policemen were smuggled into the hilltop compound.

The area, in East Jerusalem, has been under Israeli occupation since the 1967 Middle East war.

Israel has repeatedly pledged to maintain the status quo – a delicate set of arrangements in place at the site for the past 50 years. Any changes there are often regarded by Palestinians, who claim East Jerusalem as the capital of a sought-after state, as a violation of these arrangements.

Palestinians had refused to enter the Haram al-Sharif/Temple Mount – home to the al-Aqsa mosque and Dome of the Rock – unless the metal detectors were removed, holding prayers outside instead.

On Friday though, a number of worshippers went into the site to pray.