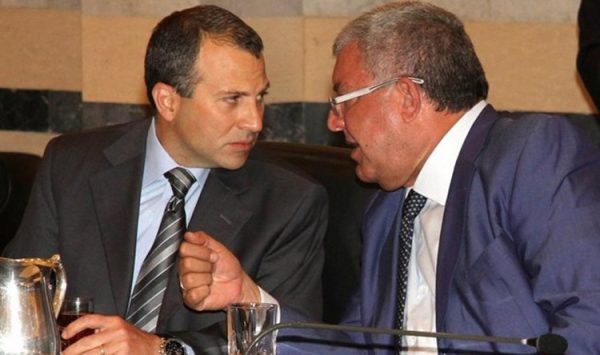 It does not appear that the renewed dispute between Lebanese Interior Minister Nouhad al-Mashnouq and Foreign Minister Jebran Bassil over the country’s foreign policy will have repercussions on the ties between President Michel Aoun and the ministers of Prime Minister Saad Hariri’s cabinet.

Circles close to the ministers said that they are keen on strengthening their relationship in order to cement the foundations of the government and Aoun’s term in office.

Mashnouq and Bassil had in the past few hours contained the repercussions of their dispute that had flared up again in wake of Lebanon’s voting in the UNESCO elections. The original dispute had erupted over Bassil’s meeting in New York last month with his Syrian counterpart Walid al-Muallem.

This prompted a response by Mashnouq, who said that he was never such a follower. The minister had previously described Lebanon’s foreign policy as “lost,” indirectly criticizing Bassil’s conduct.

The tensions between Mashnouq and Bassil had not affected their respective parties, the Future  Movement and Free Patriotic Movement (FPM).

Future  Movement MP Oqab Saqr and FPM MP Hikmat Deeb agreed that the differences between the two ministers has not affected the parties.

Saqr told Asharq Al-Awsat: “This relationship is being handled with great care by Aoun and Hariri.”

“The foreign minister commits mistakes on several occasions, but he performs a good job on others,” he continued.

Deeb for his part said that the tit-for-tat statements between Mashnouq and Bassil do not affect the government and the current FPM alliance with Hariri.

He told Asharq Al-Awast that the dispute is part of electoral campaigning and attempts by either official to win over voters for next year’s polls.