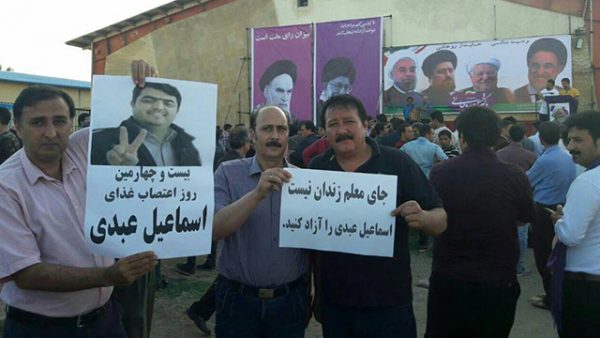 An online petition signed by more than 15,000 people calling for the release of imprisoned teachers’ rights leader Esmail Abdi has been delivered to the judiciary and the office of the president.

“Mr. Abdi is not a thief, murderer, drug dealer, embezzler, foreign spy or traitor to his country,” said the petition addressed to Judiciary Chief Sadegh Larijani. “He is a trade union activist elected by the teachers of Tehran according to the laws and regulations of the Islamic Republic of Iran.”

“Mr. Larijani! The teachers of Iran expect you will take the necessary step to free Mr. Abdi as soon as possible,” continued the petition.

A source close to the activist told the Center for Human Rights in Iran (CHRI) on May 24 that Abdi’s health has recently deteriorated from his hunger strike, but officials have not responded to his condition.

“If something happens to my client, I will hold the judiciary chief, the Supreme Court, the prosecutor general, the Tehran prosecutor, the head of the Prisons Organization, the Intelligence Ministry and all other security agencies responsible for his life,” Abdi’s lawyer, Amir Salar Davoudi, told CHRI on May 3 after Abdi was hit with a severe drop in blood pressure and vertigo.

In a letter announcing his hunger strike on April 30, Abdi said he would continue to refuse food “until my case is investigated in a normal way outside the security apparatus.”

Abdi, the former secretary general of the Iranian Teachers’ Trade Association, has been on hunger strike in Evin Prison in Tehran since April 30, 2017 for demanding an end to the prosecution of peaceful trade union activists on national security charges.

The semi-official Iranian Labor News Agency (ILNA), which reported the delivery of the petition on May 24, also quoted a reformist member of Iran’s Parliament stating that she was following up on Abdi’s case.

“We are trying to resolve the issues concerning activist teachers through talks with the judicial branch,” said MP Fatemeh Saeedi after meeting with a group of teachers seeking support for Abdi’s freedom.

In November 2016, Abdi began serving a six-year prison sentence for “propaganda against the state” and “collusion against national security” for his peaceful activism in support of labor rights.

An Appeals Court in Tehran upheld the sentence in October 2016 following pressure from the Islamic Revolutionary Guard Corps (IRGC).

“Amidst deafening calls from officials for the rule of law, democracy, human rights and civil liberties in the post-nuclear deal (2015) era, we are witnessing the arrest of board members of teachers’ guilds and independent workers’ organizations, who are put on trials that last a few minutes and condemned on the basis of identical charges such as ‘acting against national security’ and ‘propaganda against the state,’” wrote Abdi in his letter announcing his hunger strike.

On May 22, one of Iran’s largest independent trade unions welcomed the acquittal of Jafar Azimzadeh and Shapour Ehsani-Rad, two prominent labor activists who had been issued long prison sentences for their peaceful advocacy of labor rights.

“The Appeals Court’s decision finding them innocent is an important victory in the just struggle of the Iranian workers and a step forward in the fight against accusing trade union activists and civil rights workers of national security crimes,” said the Free Workers Union of Iran (FWUI) in its statement. “We expect that the decision by Branch 8 of the Central Province Appeals Court will become the standard in all other courts in the country.”