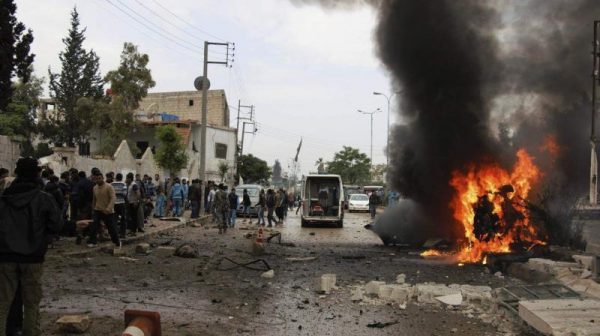 Airstrikes on an Islamic State-held town in eastern Syria have killed scores of people in recent days
Share:

Airstrikes on an Islamic State-held town in eastern Syria have killed scores of people in recent days, a war monitoring group said Friday, as fighting there intensifies ahead of a U.S.-backed assault on the militants’ capital in nearby Raqqa.

The raids on al-Mayadin, in the oil-rich province of Deir al-Zor, have killed as many as 50 people in the past two days, including 35 civilians on Thursday alone, according to the British-based Syrian Observatory for Human Rights. The group, which relies on a network of local contacts to track the Syrian civil war, said residents had identified the aircraft as belonging to the U.S.-led coalition.

Coalition spokesman Col. Ryan Dillon did not immediately respond to a request for comment, but he told the Reuters news agency Friday that coalition forces had conducted strikes near Mayadin on Thursday and Friday, and were assessing the results. A news release from U.S. Central Command on Friday listed five strikes in Deir al-Zor, which the military said destroyed “a command and control node, and an ISIS headquarters,” using another term for the Islamic State.

Also Friday, the U.S. military said a U.S. service member had died of injuries sustained during a vehicle rollover in northern Syria.

According to the Observatory, the Thursday evening strike in Mayadin, which lies in the fertile Euphrates River Basin, allegedly hit a four-story block housing family members of Islamic State families. The majority of those killed were relatives of Islamic State militants, the group said.

It was the latest in a series of strikes in recent weeks in Mayadin, a mid-sized town the Islamic State captured in 2014. U.S. Central Command said Friday that coalition strikes in Mayadin on April 27 and May 11 killed senior Islamic State commanders involved in planning the group’s external operations. 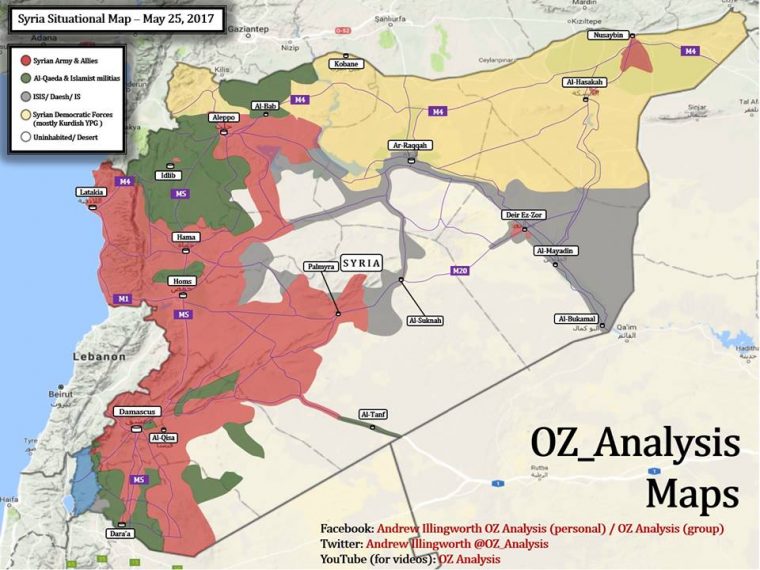 The group’s fighters have terrorized local residents and executed scores civilians in the town.

The aerial bombardments have been “unusually intense in the last two weeks” around Mayadin and other areas of Deir al-Zor, said Omar Abu Leila, the Germany-based editor of Deir Ezzor 24, a local independent news outlet.

Mayadin is currently home to tens of thousands of displaced Syrians, according to Abu Leila and international rights groups.

Both the locals and the displaced “are all deathly afraid now” of the airstrikes and rising violence in the area. “It’s all the same now — the Russians, the international coalition, and Daesh,” said Abu Leila. Daesh is the Arabic acronym for the Islamic State.

In a statement Friday, United Nations human rights chief, Zeid Ra’ad al-Hussein, urged all “air forces operating in the country to take much greater care to distinguish between legitimate military targets and civilians.”

“The same civilians who are suffering indiscriminate shelling and summary executions by [the Islamic State], are also falling victim to the escalating airstrikes” in provinces like Raqqa and Deir al-Zor, Hussein said.

“The rising toll of civilian deaths and injuries already caused by airstrikes in Deir al-Zor and Raqqa suggests that insufficient precautions may have been taken in the attacks,” Zeid said. “Just because [the Islamic State] holds an area does not mean less care can be taken.”

The U.S. military is already under fire from rights groups for rising civilian casualties in nearby Iraq, where U.S.-backed Iraqi forces are fighting to dislodge the Islamic State from the northern city of Mosul.

On Thursday, U.S. Central Command released an unclassified summary of the military’s investigation into a strike that killed more than 100 civilians sheltering in a residential building in Mosul in March. The Pentagon admitted to the strike, which it said had targeted two Islamic State snipers, but blamed the high number of casualties on secondary explosions from Islamic State weapons stored in the building.