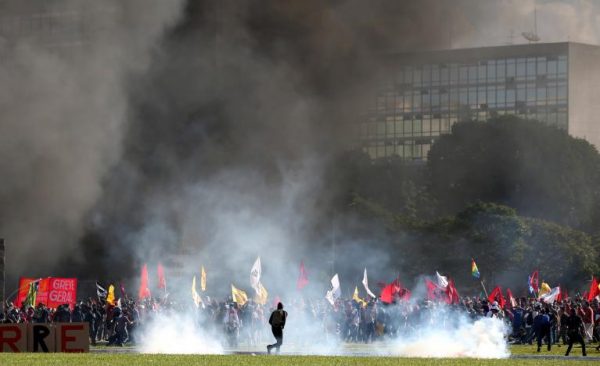 Smoke rises near the building of the Agriculture Ministry during a protest against President Michel Temer and the latest corruption scandal to hit the country, in Brasilia, Brazil, May 24, 2017. REUTERS/Paulo Whitaker
Share:

By Alonso Soto and Anthony Boadle

BRASILIA – Protesters demanding the resignation of Brazilian President Michel Temer staged running battles with police and set fire to a ministry building in Brasilia on Wednesday, prompting the scandal-hit leader to order the army onto the streets.

Tens of thousands of demonstrators had gathered peacefully at midday in the capital before marching down the grassy esplanade lined by federal ministries toward Congress, calling for Temer’s ouster and an end to his austerity program.

Police unleashed repeated volleys of tear gas, stun grenades and rubber bullets to halt protesters as they neared the Congressional building. Officers clubbed several demonstrators to block their path, according to Reuters witnesses.

Masked protesters responded by firing powerful fireworks at police, setting ablaze furniture in the lobby of the Agriculture Ministry and spraying anti-Temer graffiti on government buildings.

A local television station showed images of a police officer firing his handgun at demonstrators.

Large plumes of black smoke billowed high into the air in front of the modernistic Congress building after protestors set tires on fire.

It was the most violent protest in Brasilia since anti-government demonstrations convulsed Latin America’s largest nation in 2013. By nightfall, protestors began to disperse.

One protestor was shot and wounded, police said. Local media reported at least one other demonstrator was seriously injured by a rubber bullet to the face, while another lost part of his hand while trying to throw an explosive device at officers.

Defense Minister Raul Jungmann announced on national TV that Temer had approved a decree allowing army troops to assist police in restoring order for the next week, giving soldiers policing powers and the right to make arrests.

The move brought immediate criticism in a nation where memories of a brutal 1964-85 military dictatorship remain fresh.

“What are they going to do? Intervene and wage war against the people that are out there on the esplanade?” Senator Gleisi Hoffmann of Rousseff’s Workers Party said on the Senate floor.

In the nearby chamber of the Supreme Court, just a few hundred meters from the demonstration, Justice Marco Aurelio Mello said he was “a little worried” about Temer’s decree that would allow the army to patrol the streets of the capital.

Senator Renan Calheiros, a strident critic of Temer from within his own Brazilian Democratic Movement Party (PMDB), said the president had broken no constitutional rules by deploying the military.

“But it’s bordering on foolishness to do so when the country is on fire. It’s bordering on irresponsibility,” said Calheiros, who is himself under investigation for graft.

Temer, a former vice president whose government’s approval rating is in the single digits, took office a year ago after former President Dilma Rousseff was impeached for breaking budgetary laws.

Rousseff and her supporters labeled that a “coup” orchestrated by Temer and his allies in an effort to halt a sweeping, three-year corruption probe that has placed scores of sitting politicians under investigation.

Temer defiantly refused to resign last week after the Supreme Court opened an investigation into allegations that he condoned paying off a potential witness and took millions in bribes and illegal campaign funds. The claims were made in plea-bargain testimony from executives at meatpacking giant JBS SA.

Riot police set up cordons around Congress, where groups of coalition lawmakers met to discuss a possible post-Temer transition should the president resign or be ousted by one of Brazil’s top courts.

If that happens, Congress would have 30 days to pick a successor to lead Brazil until elections late next year.

The parties of Temer’s main allies are split over whether to quit his coalition immediately or first agree on a consensus figure to replace him and save his reform agenda. The market-friendly measures are considered vital to restore business credibility and investment needed to end a two-year recession.

Outside, the message demonstrators chanted was clear: “Out with Temer!, general election now!”

The unions were galvanized by opposition to a bill that would cut their power in the workplace by allowing temporary non-unionized contracts and ending obligatory payment of union dues.

“Temer can’t stay and these reforms that trample on our rights cannot advance. We want elections now,” said Dorivaldo Fernandes, 56, member of a health workers union in the neighboring state of Goias.

He said a president chosen by Congress was not acceptable. “We want new people who are clean and can clean up this mess.”

Leftist senators, who on Tuesday succeeded in obstructing discussion of the labor reform bill, read out a constitutional amendment in committee that would allow early general elections instead of waiting until October 2018.

But chances of changing the constitution in the midst of a political crisis were minimal.

One of the amendment’s backers, Senator Randolfe Rodrigues, leader of the Socialist Popular Action party, said Temer’s base of support in Congress was falling apart.

“His coalition is distancing itself from Temer because it knows that this is a dying government. The next step is to mobilize support for elections on the streets.”