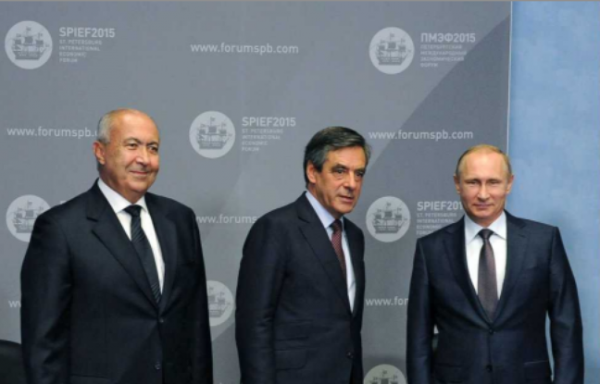 The French presidential candidate François Fillon has been hit by allegations he was paid $50,000 (£40,000) to arrange a meeting between a Lebanese billionaire and Vladimir Putin as prosecutors investigating whether his wife was paid for fake jobs widened their inquiry to look into whether she signed forged documents.

The latest accusations came a week after Fillon, 63, was formally put under investigation for a misuse of public funds over the €700,000 of taxpayers’ money British-born Penelope Fillon earned for acting as his parliamentary assistant.

French media reported on Tuesday that the inquiry was examining suspected “aggravated fraud, forgery and use of forgeries” to claim she had worked when she had not, which her lawyer denies.

The allegations of Fillon’s role in a meeting between the Russian president, the Lebanese businessman Fouad Makhzoumi and Patrick Pouyanné, the chief executive of the energy giant Total, were made in the latest issue of the satirical newspaper Le Canard Enchainé, which broke the alleged “fake jobs” scandal in January.

The article said Fillon’s consultancy company 2F Conseil had earned $50,000 for setting up the 2015 meeting.

The claims are the latest in a string of accusations levelled at the beleaguered candidate for the rightwing Les Républicains party, who languishes third in the opinion polls for the first round presidential vote in a month. He is also under scrutiny for accepting an undeclared €50,000 loan from a French businessman in 2013 and for the gift of bespoke suits worth up to €48,000 from another wealthy friend.

Fillon has repeatedly denied any wrongdoing and refused to bow out of the presidential race, despite promising to drop his leadership bid if he was put under official investigation.

During the first presidential debate on Monday evening, Fillion said: “I’ve made mistakes. Who hasn’t?” At campaign meetings he has described himself as “a profoundly honest man” while lashing out at judges, the government and the media, accusing them of engaging in a “political assassination” and a witch-hunt aimed at sinking his campaign.

Fillon was favourite to win the presidential election in January before his legal woes began when the Canard Enchainé claimed Penelope Fillon and two of the couple’s five children, Marie and Charles, had been paid a total of almost €900,000 over more than a decade to work as his parliamentary assistants. French parliamentarians are allowed to employ family members but they must hold real jobs and do real work.

In a recorded 2007 interview, Penelope Fillon told the Sunday Telegraph she had done “bits and pieces” for her husband but added: “I have never been, actually, his assistant or anything like that.”

Since January, however, there have been fresh allegations almost every week.

On Tuesday, investigators widened their inquiries after examining documents reportedly signed by Penelope Fillon bearing different calculations of the hours she had worked, which were seized in police searches at the Assemblée Nationale.

The French financial prosecutor is looking into whether “the calculations constitute forgeries made to justify, after the fact, the wages that were paid”, Le Monde reported.

Penelope Fillon has been summoned to appear before judges next Tuesday. Her lawyer, Pierre Cornut-Gentille, denied the new allegations against her. “There is not the slightest bit of forgery in this case,” he said. He criticised the violation of the confidentiality of an ongoing investigation. “We won’t defend ourselves before facing the court,” he told AFP.

On Wednesday morning, Fillon’s spokesman, Bruno Retailleau, criticised the press for orchestrating a “serialised campaign” against the candidate.

“We can clearly see these are organised leaks. The secrecy of the investigation has been violated. These leaks are either coming from the investigators or from the judges … every day, every week people are seeking to drop new stories that we can’t even verify … I think the French have the right to hear the issues,” Retailleau told RTL radio. “We’re being dragged into a soap opera.”

On Tuesday the French president, François Hollande, sought to contain a scandal in his outgoing Socialist government by accepting the resignation of the interior minister, Bruno Le Roux, offered almost immediately after France’s financial prosecutor opened a preliminary inquiry into claims Le Roux paid his teenage daughters €55,000 to work for him during their school holidays.

The prime minister, Bernard Cazeneuve, had earlier insisted MPs must be “beyond reproach” regarding their financial activities.

Opinion polls suggest the far-right Front National leader, Marine Le Pen, and the independent centrist Emmanuel Macron will go through from the first-round presidential vote on 23 April to the second round run-off on 7 May.