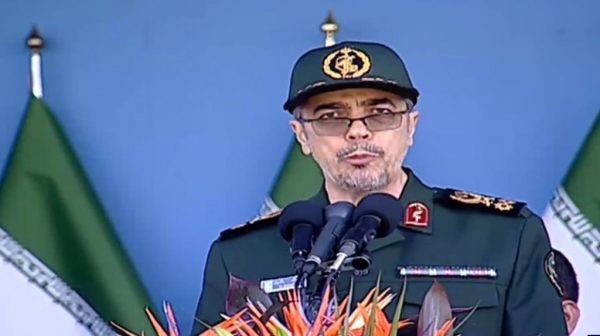 Iran may seek to set up naval bases in Yemen and  Syria in the future, the chief of staff of the Iranian armed forces said in remarks published on Sunday.

His comments, likely to be of concern to Shi’ite Iran’s Sunni regional rival Saudi Arabia and its allies, raised the prospect of distant footholds perhaps being more valuable militarily to Tehran than nuclear technology.

“We need distant bases, and it may become possible one day to have bases on the shores of Yemen and Syria, or bases on islands or floating (bases),” said General Mohammad Hossein Baqeri, quoted by the Shargh daily newspaper.

He went on to say that Iran needs a fleet in the Indian Ocean that would be equal to the one stationed in the Gulf of Oman, and urged the Navy to enhance its intelligence activities by working on satellite and cyber-space technologies, as well as by developing naval drones.

Iran should also develop its own naval infrastructure, as its coasts could provide space for several new ports, the major general said, stressing that the Islamic Republic should break Russia’s monopoly on providing Central Asian countries with access to international waters.

“Is having distant bases less than nuclear technology? I say it is worth dozens of times more,” added Baqeri, who was speaking at a gathering of naval commanders.
At the same time, Iranian Navy commander Rear Admiral Habibollah Sayyari told the gathering of senior navy commanders that Iran should boost its military presence in international waters to protect its economic interests and demonstrate its power.
The navy has already deployed 49 flotillas to various maritime zones, the admiral said, adding that Iran particularly “provided security of the northern Indian Ocean and showcased Iran’s symbol of power,” as reported by Tasnim.
He went on to say that Iranian warships have escorted 3,844 merchant vessels and oil tankers through the Gulf of Aden, thus securing them from pirates and preventing a blow to the Iranian economy.
On November 22, Iran said that it is increasing its naval capabilities by building three new bases in the Persian Gulf and the Gulf of Oman, citing security threats posed by Somali pirates.

Iran and Saudi Arabia are on opposite sides in Middle East conflicts, with the Iranians a main ally of President Bashar al-Assad in Syria’s civil war and of the armed Houthi movement fighting a Saudi-led military coalition in Yemen.

In a rare rebuke for Iran, a Houthi official on Sunday criticized Baqeri’s comments and urged Tehran to read about the history of failed attempts to occupy Yemen.

“Not one inch of Yemen’s land or waters will be forfeited to any foreign party … whether a friend or an enemy,” said Saleh al-Samad, the Houthis’ political council chief in a statement on Facebook.