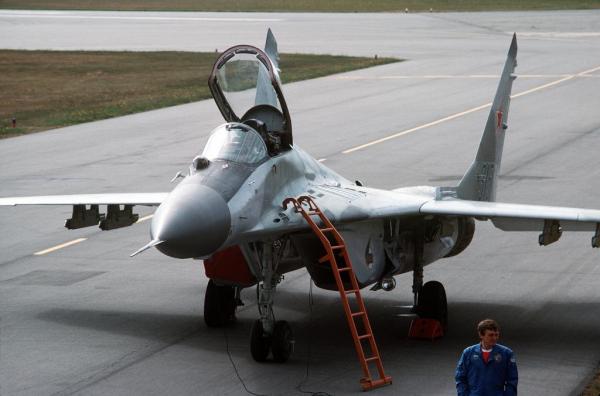 A pilot ejected safely Monday before a Russian MiG-29, similar to the one pictured, crashed into the Mediterranean Sea near the coast of Syria. The Russian Ministry of Defense said the aircraft appeared to have mechanical problems after it took off from the Admiral Kuznetsov aircraft carrier. Photo by MSGT Pat Nugent/USAF
Share:
A Russian fighter jet crashed into the Mediterranean as it attempted to land on a Russian aircraft carrier, state news agency Tass reported.

Citing the Russian Defense Ministry, Tass said the pilot of the MIG 29 ejected a few kilometers from the carrier and was recovered safely.

Russian state media outlet Sputnik quoted a Defense Ministry statement blaming the accident on a technical problem. It’s unclear when the crash took place. A flotilla of Russian naval vessels, including the Soviet-era aircraft carrier, arrived off the Syrian coast on Saturday. Russia has been supporting Syrian government operations in the conflict in that country.

The Russian flotilla began its voyage last month, departing from the North Sea and skirting the coast of the UK. NATO and UK Ministry of Defense officials closely monitored the vessels.

In a statement issued at that time, the Russian navy said the voyage was “to ensure naval presence in the important areas of the World Ocean. Special focus will be made on safeguarding security of maritime traffic and other types of Russian maritime economic activity and also responding to new kinds of modern threats such as piracy and international terrorism.”

But others have taken a different view.
“It’s a show of force and a show of capabilities,” Peter Felstead, editor of Jane’s Defence Weekly, told CNN last month. “In terms of strike missions, they (the Russians) could just as easily have conducted them with the land-based aircraft they already have in Syria.”
CNN