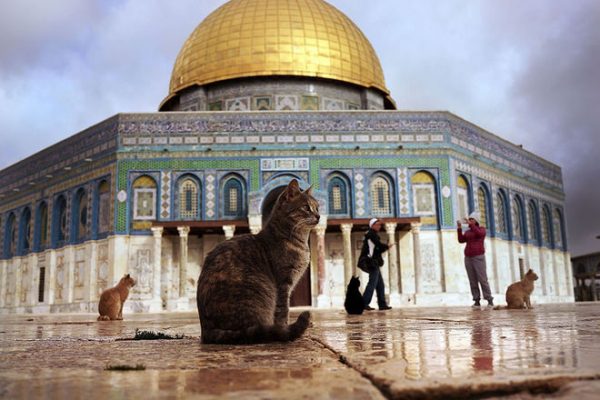 Here, the Dome of the Rock in Jerusalem, Israel . The dome is one of the most popular attractions of the holy site called Temple Mount by the Jews and Al-Haram al-Sharif by Muslims.
Share:

UNESCO’s executive board on Tuesday approved a resolution recognising the holy sites of occupied East Jerusalemn as part of the heritage of Palestine in a move that has infuriated the Israeli regime.

The text, which touches on the Israeli occupation’s management of Palestinian religious sites, has infuriated Israel by referring throughout to the Al Aqsa mosque compound in east Jerusalem’s Old City – Islam’s third holiest site – only by its Muslim names: Al Aqsa and Al Haram Al Sharif.

The site is also revered by Jews as the Temple Mount which according to Jewish belief housed the First and Second Temples.

Palestine’s deputy ambassador to UNESCO, Mounir Anastas, told reporters the resolution “reminds Israel that they are the occupying power in east Jerusalem and it asks them to stop all their violations,” including archaeological excavations around religious sites.

Israel claims the resolution denies the Jewish connection to holy sites in the city. The text, entitled Occupied Palestine, however does “affirm the importance of the Old City of Jerusalem and its Walls for the three monotheistic religions”.

The board adopted the measure by consensus in its morning session at Paris-based UNESCO. A draft form of the resolution had already been approved by a commission last week. Among vetoing states were Germany, Estonia, the US, Lithuania, the Netherlands and the UK. India and Greece, which have traditionally supported Palestine at the UN, abstained.

It is the second time this year that UNESCO has been the arena of tensions between the Israelis and Arab countries.

In April, the organisation passed a resolution condemning “Israeli aggressions and illegal measures against the freedom of worship and Muslims’ access to the Al Aqsa Mosque”.

Israel last week suspended its ties with UNESCO over the draft resolution. The regime had already suspended its funding to UNESCO when Palestinian membership was approved, along with the United States, which used to provide 22 per cent of the agency’s budget.

“We won’t negotiate and we won’t take part in these ugly games,” the regime’s ambassador to UNESCO, Carmel Shama-Hacohen, said after the ratification. “There is no place for these games in UNESCO”.

The longstanding dispute is also linked to Israel’s refusal to grant visas to UNESCO experts to go in the country and assess the level of preservation of the holy sites in Jerusalem.

Elias Sanbar, Palestinian ambassador to UNESCO, said this refusal to allow a UNESCO mission was a “very big problem.”

“The aim of the mission was not to say that Israel was an occupying power or not, the whole world knows it,” he said. “The aim was to say: according to the field of competence of UNESCO, are the monuments and historical sites of UNESCO well-preserved, and if restored, well-restored according to the rules of restoration?”

On this issue, Shama-Hacohen said “there will not be any mission to Jerusalem under political decisions -with the words ‘occupying power’ with false allegations of Israel, we will never agree to such a mission. Jerusalem is an open city. Jerusalem is a transparent city.”

East Jerusalem is considered ‘occupied’ by most countries of the world, including the United States, and most foreign embassies to Israel are based in Tel Aviv,

Israel and the Palestinian authority are not members of the executive board of UNESCO.