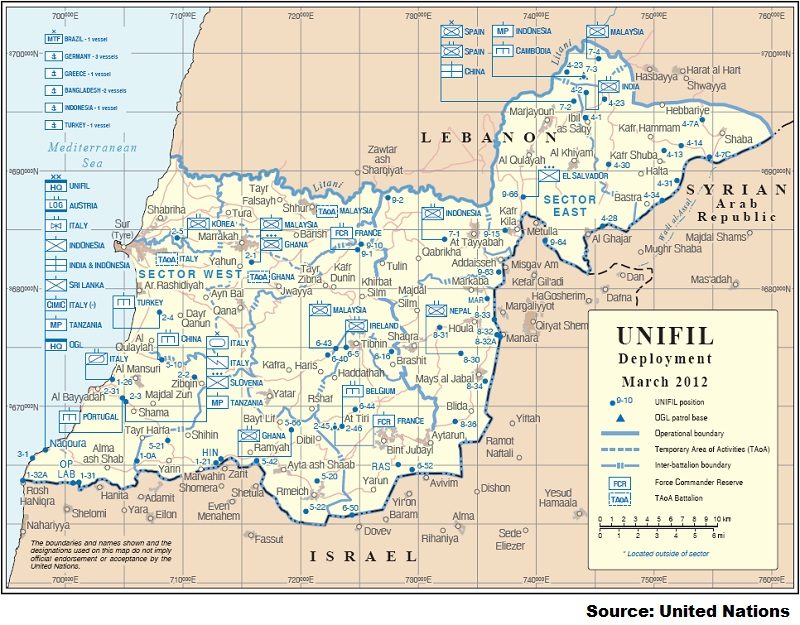 Several peacemakers from the United Nations Interim Force in Lebanon (UNIFIL) were wounded on Wednesday, when their vehicle drove over a 30 year old landmine in southern Lebanon.

According to a military source in Beirut, the UNIFIL soldiers were driving off-road near the Lebanese-Israeli border, when their vehicle crossed paths with the landmine.

The UNIFIL peacemakers were rushed to the nearest field hospital after an ambulance arrived at the scene of the explosion.

The National News Agency said a vehicle belonging to UNIFIL’s Spanish battalion was badly damaged after it accidentally triggered an anti-personnel landmine near the south Lebanon town of Ibl al-Saqi, located in the Marjayoun district.

Photos from the scene showed that the explosion ripped off the vehicle’s rear left wheel.

The Lebanese Army erected a security cordon around the area of blast occurred, fearing the presence of more landmines.

Israel left about 550,000 mines planted in southern Lebanon when it withdrew from the country in May 2000, according to the Lebanese Mine Action Center, which operates under the Lebanese Army.

The LMAC has reported hundreds of casualties from landmines and Israeli cluster munitions since the end of Israel’s occupation of south Lebanon.

Israel also dropped about 4 million cluster bombs over southern Lebanon during the 2006 war with Hezbollah , a quarter of which did not detonate and continue to maim and kill people to this day.