CARAVAN, a traveling theatre to counter prejudice against Syrian refugees in Lebanon 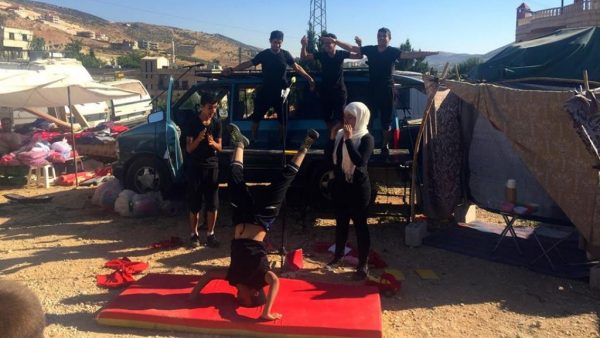 This traveling theatre has a unique goal: offering an antidote to the discrimination that many Syrian refugees have felt in Lebanon. The project, which is called “The Caravan”, was launched last January by a Lebanese NGO. Since then, the theatre on wheels has been on the road in Lebanon, and has even made its way to other countries, notably Tunisia.

Since the beginning of the Syrian war, in 2011, millions of Syrians have fled their country for neighbouring Lebanon. The influx has caused some tensions. Several organisations have denounced the racist attitudes of some Lebanese toward the refugees. Lebanese authorities have not given them the right to work, and many refugees live in difficult conditions, crammed into makeshift camps.

Thousands of Syrian refugees are today squeezed into camps in Lebanon’s Beqaa Valley. Here, the Syrians are often accused of competing with Lebanese for work.

It was in the Beqaa region that The Caravan project was born in January 2015. A group of Syrian actors started crisscrossing the country in a van to tell the stories of refugees – the ordinary people who have seen their lives shattered and their country torn apart by war for the past five years. The Caravan gathered gathered their stories in the Syrian refugee camps in Lebanon.

They use a rudimentary set: a wood table, a few wigs, a tent made with bits of cloth. But the stories are touching. Like the one about a woman who called multiple hospitals because her infant needed to be placed in an incubator. At the end of the story, the newborn dies.

Sabine Choucair, the driving force behind The Caravan, was trained as a clown. For her itinerant theatre, she received 113,000 euros of funding from the European Union and Unicef Lebanon.

The media talk a lot about refugees in terms of numbers, but they’re rarely interested in the human side of things. In a way this project tries to fix that situation by telling refugees’ stories. The idea is to help the Lebanese people get to know Syrians better, since it’s hard to like someone when you don’t know them.

We started by collecting stories from refugees in the camps. We went there and we recorded them. After a few months, we selected eight stories.”

Some of those recordings of stories are available on YouTube, in Arabic with English subtitles.
Next, we held auditions in the camps and picked six actors from the refugees – kids, for the most part – to stage the stories. Then we held performances in several towns in the Beqaa Valley.
But because authorities had imposed strict travel restrictions on the refugees, we put together a second team made up of young (non-refugee) Syrian professional actors living in Lebanon. This team could travel in the coastal area to give performances.

At the end of each show, we walk through the crowd and give out green and purple ribbons. We ask the audience to attach the green ribbons to a tree if they don’t feel affected by the stories, and to attach the purple ribbons if they feel touched. Luckily, we’ve had a lot more purple than green.
After doing about 40 performances across Lebanon, we recently undertook a tour of Tunisia. We did three performances there, in Sfax, Nabeul, and Sidi Mansour. Tunisian people really like Lebanese people as well as Syrians – there aren’t the kind of tensions that we see in Lebanon. Right in the middle of a story people will start applauding and yell praise. We’ve really been thrilled with our reception in Tunisia.

We’re hoping to do a tour in Europe, too, especially in Germany and France, since many refugees there are also subject to prejudice.