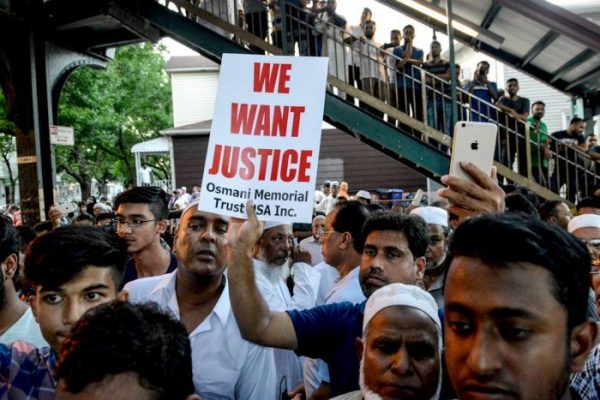 A crowd of community members gather at the location where Imam Maulama Akonjee and this assistant were shot dead. The gunman reportedly approached the pair from behind after they left the Al-Furqan Jame Masjid mosque and shot both in the head at close range about 1:50pm (local time) in the Ozone Park neighbourhood, police said in a statement, adding that no arrests had been made.
Share:

Residents of Queens in New York gathered at the mosque where just hours earlier an imam and his assistant were shot dead.

Members of the American-Muslim community are calling for a ‘hate crime’ investigation with some blaming prominent politicians for stoking Islamophobia.

“For those in leadership like Mr. Trump and Mr. Giuliani and other members of institutions that project Islam and Muslims as the enemy this is the end result of their wickedness,” said one man at the gathering outside the mosque in Ozone Park.

“You need not be a Muslim, you need not be a person of any faith, you just need to be a person of conscience. Imagine your father gunned down for no reason, then let that feeling, that motivate you, to come out of your silence and I especially say this to those with influence within the community and beyond. Every single one of us has a responsibility,” said Afaf Nasher, Executive Director of the Council of American Islamic Relations (CAIR) New York.

Police say so far there is no evidence the pair were targeted because of their faith.

Crimes against Muslims saw a sharp spike following terrorist attacks in Paris and San Bernadino late 2015, while Trump called for Muslims to be banned from entering the US.