Second dialogue session focused on creation of a Lebanese Senate 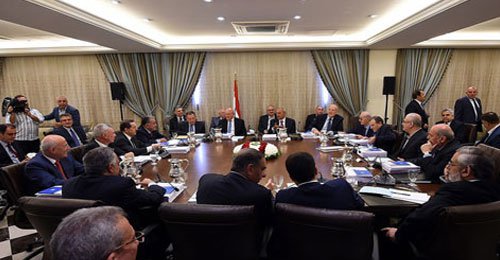 The  Lebanese leaders held another national dialogue session on Wednesday — the second of three scheduled meetings . The focus  of the session was  the  creation of  a senate and implementing administrative decentralization, National News Agency reported.

The session convened at Ain el-Tineh following a meeting a day earlier that media reports described as “positive,” although the outcome did not record a major breakthrough.

Most of the heads of the parliamentary blocs attended Wednesday’s meeting  with he exception of the  head of the Democratic Gathering bloc MP Walid Jumblatt who was represented by MP Ghazi Aridi, and head of the Change and Reform bloc MP Michel Aoun who was  represented by his son-in-law and Foreign Minister Gebran Bassil.

After the session  ended, Phalange party leader Sami Gemayel said in  a statement : “Today decentralization has been addressed seriously which is a pivotal issue for the Lebanese. We have put this file on the right track today.

“As for the election of a president and agreeing on an electoral law, I am sorry to say that we have been escaping the implementation of democracy for many years now, because a a president cannot be elected through an agreement between the interlocutors on the table but through a secret voting process, as stipulated in the constitution.”

For his part, Finance Minister Ali Hassan Khalil dubbed Wednesday’s meeting as “the most important session among all,” and assured that discussing an electoral law will begin tomorrow.

Berri had called for three successive dialogue meeting on August 1, 2 and 3 in a bid to solve the country’s political impasse.

Iran’s influence in Lebanon is at odds with all  the countries supporting opposing political camps.