Israeli Defense Minister steps down, Lieberman a polarizing politician to replace him 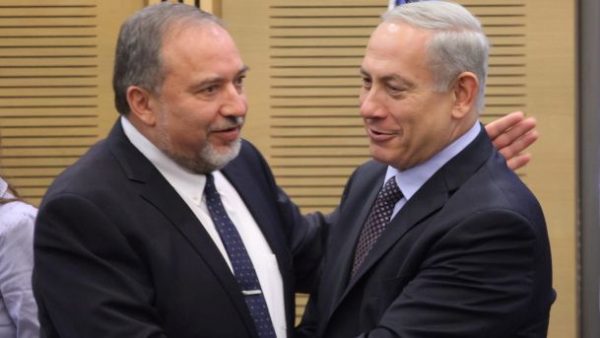 Benjamin Netanyahu (R) offered Avigdor Lieberman (L) one of Israel’s most polarizing politicians the Defense ministry . According to Haaretz newspaper Netanyahu does not trust Lieberman and fears him at the same time but his aim is to break Israel’s Oldest Elite: The Military
Share:

Israel’s defense minister officially stepped down on Sunday, capping a tumultuous week of politics that is expected to result in the replacement of the former military chief with an inexperienced hard-liner in the sensitive post.

Moshe Yaalon’s departure cleared the way for Avigdor Lieberman, one of Israel’s most polarizing politicians, to take over as defense chief.

Prime Minister Benjamin Netanyahu last week invited Lieberman’s Yisrael Beitenu party into the government in a move meant to shore up his narrow governing majority. But Lieberman reportedly demanded the Defense Ministry as a condition, forcing Netanyahu to ask Yaalon to step aside. Yaalon angrily announced his resignation on Friday, saying the government has been taken over by “extremist and dangerous elements.”

Netanyahu and Lieberman were still negotiating their coalition agreement on Sunday, and it was unclear when he would formally join the government.

Yaalon held a brief ceremony at Israel’s military headquarters in Tel Aviv, where he was greeted by an honor guard and shook hands with the military leadership. After the ceremony, he was whisked away in a jeep.

Yaalon, like Netanyahu, is a security hawk who was deeply skeptical of peace prospects with the Palestinians and led the military through a 50-day war against Islamic militants in the Gaza Strip in 2014. At times, he angered the U.S. by criticizing American peace initiatives in the region as naive or messianic. But he was protective of the military when it came under fire from ideologically-driven hardliners.

His departure leaves the Cabinet dominated by religious and ultranationalist ministers who oppose the establishment of a Palestinian state and have close ties to the West Bank settler movement. Lieberman himself is a West Bank settler.

At an appearance with the visiting Czech prime minister, Netanyahu described himself as an experienced former army commando who remains in charge of security.

“Ultimately the prime minister leads the operations, along with the defense minister and the chief of staff, and apparently I have not done a bad job during my years as prime minister,” he said. “This is how it will be now: a responsible, forceful and rational policy to defend Israel.”

In a three decade political career, Lieberman has at times been Netanyahu’s closest ally and at other times a rival. While he is an experienced politician who has been foreign minister and held other top jobs, his security experience is limited. Yaalon is a former chief of the Israeli military, while Lieberman only had a brief, low-level career in the army.

Over the years, Lieberman has made headlines for a series of incendiary comments. At one point, he called for bombing Egypt’s Aswan Dam and suggested toppling the internationally-backed Palestinian Authority in the West Bank. Just a few weeks ago, he threatened to kill a Hamas leader in the Gaza Strip. He has repeatedly voiced skepticism about pursuing peace with the Palestinians.

He has also questioned the loyalty of Israel’s Arab minority and is reportedly pushing for a death penalty against Arabs convicted of terrorism.

At home, however, the tensions between Yaalon and Netanyahu had little to do with Mideast peacemaking, and much more to do with the role of the military in Israeli society.

The men clashed following the fatal shooting of a wounded Palestinian attacker by an Israeli soldier caught on video last March.

Military leaders said the soldier’s behavior violated army norms and ethics, while hardliner politicians sided with the serviceman. With the soldier now on trial for manslaughter in a military court, Yaalon has backed the army. Lieberman went to the court to show solidarity with the soldier.

Tensions escalated earlier this month when a senior general compared current trends in Israeli society to the atmosphere in Nazi-era Germany. The comments, made at a Holocaust memorial event, infuriated Netanyahu, while Yaalon backed the general’s right to express his opinion.

Those close to Lieberman say he is more pragmatic and level-headed than he appears in public.

Speaking to his Cabinet Sunday, Netanyahu said he was committed to pursuing peace with the Palestinians, in an apparent attempt to ease concerns over Lieberman’s arrival.

Peace talks have ground to a standstill since Netanyahu took office in 2009 due to the large gaps between him and the Palestinians over virtually all key issues.

Netanyahu has endorsed the idea of the establishment of a Palestinian state as part of a peace agreement. But he has added a series of conditions that have led the Palestinians to conclude that there is no point in negotiating with him. The international community, including the U.S. and European Union, have largely backed the Palestinians and urged Netanyahu to soften his positions.

Netanyahu told his Cabinet that as he prepares to add a new partner to his governing coalition, he will “continue to seek a peace process with the Palestinians.”