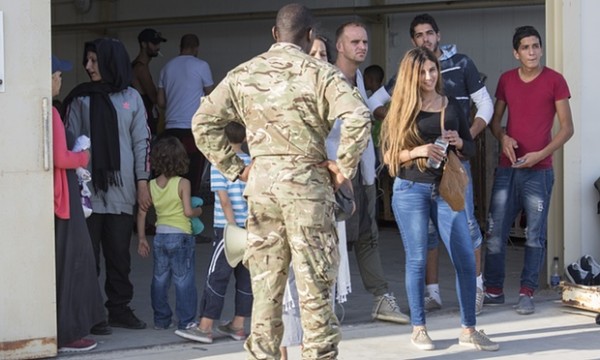 Cyprus has agreed to process the asylum claims of all the 114 refugees and migrants who arrived at a British military base on the island despite the UN’s view that they are the UK’s responsibility.

The asylum seekers, who are mostly Syrians but include Palestinians and Lebanese, spent a night in a hangar at RAF Akrotiri, after being abandoned in two fishing boats near the base by people smugglers.

Under a 2003 agreement between the UK and Cyprus, asylum seekers arriving directly on to the sovereign bases areas on the island are the responsibility of the UK. But they are granted access to services in Cyprus at Britain’s cost.

A spokeswoman for the UN’s refugee agency, the UNHCR, said: “Cyprus has agreed to process the asylum applications on behalf of the sovereign bases area, so the responsibility remains with the UK.”

The UNHCR has asked for access to the migrants, but has been told this will not be granted until Friday.

A statement from the Ministry of Defence said Cyprus had already started to assess who among the group would be granted refugee status.

It said: “We are grateful to the Republic of Cyprus for agreeing to process all asylum claims through their system. That process started this morning and will be conducted as swiftly as possible with further details being provided when appropriate.”

All members of the group, including 28 children, were found to be fit and well after an assessment by military medics at the base. Some, however, showed signs of dehydration after spending more than 48 hours at sea.

The asylum seekers were expected to be taken to a centre near the Cypriot capital of Nicosia.

One of them, a 26-year-old pregnant woman named Jana, said: “I come from Morocco but live in Syria. I was scared [on the boat]. I was concerned about what was going to happen to me. I want to go to Europe. I want to leave here. I am scared.”

Her husband, Mustapha, 28, said: “We were thinking that we were going to Greece.”

All of the migrants at Akrotiri interviewed by Forces TV, the broadcaster embedded with the British military, said they wanted to reach Germany.

Kyriacos Mavri, the commander of the Cyprus coastguard, said the refugees were likely to have been duped by the smugglers who charged them $4,000 (£2,600) each before abandoning them two miles out to sea and fleeing the scene in fast boats.

Speaking to the Guardian, Mavri said: “They probably told the refugees this is Greece or Italy and then they left. The refugees don’t want to come to Cyprus, they want to go to Greece or Italy, because once they get to Cyprus they can’t move freely as it’s an island.”

RAF Akrotiri has been used for launching bombing missions against Islamic State (Isis) in Iraq.

This is the first time in the current crisis that refugees have landed on Akrotiri, but the base is still at the centre of a long-running legal battle involving Iraqi Kurds who arrived there in 1998.

At the time the administration on the base tried to pass the burden on to the Cypriot authorities but was told the migrants were Britain’s responsibility.

Since then, Britain and Cyprus have agreed that refugees who land on sovereign UK territory are handed over to Cyprus. Asked whether the migrants would be able to claim asylum in Britain, an MoD official said: “That’s not our understanding.”

Britain fears setting a precedent that could encourage other asylum seekers to regard the sovereign base areas on Cyprus as a fast track to the UK from the Middle East and north Africa.