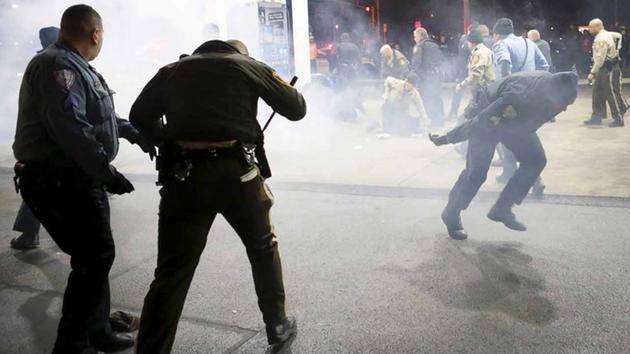 A white policeman shot dead a black man brandishing a pistol at a suburban St. Louis gasoline station overnight, igniting violence reminiscent of riots over the police killing of an unarmed black teenager in nearby Ferguson, police said on Wednesday.

Black officials in Missouri were at pains to distinguish the death of a suspect with a gun from cases where unarmed black men were killed by police officers, incidents that led to nationwide protests and bitter debate about how American police forces treat non-white citizens.

The Berkeley, Missouri, shooting happened late on Tuesday at a Mobil On The Run gasoline station, within walking distance of the Ferguson street on which a white police officer shot dead 18-year-old Michael Brown in August.

“This is not a policeman in the city of Berkeley going out half-cocked,” Berkeley Mayor Theodore Hoskins said at a news conference. “You could not even compare this with Ferguson.”

A crowd of 200 to 300 people gathered at the gasoline station after the shooting, and bricks and three fireworks were thrown, two of them at the roughly 50 officers at the scene, St. Louis County Police Chief Jon Belmar said.

Two officers were injured. Four people were arrested and charged with assault, Belmar said. Calm had returned to the area by Wednesday morning.

The shooting occurred after the officer, a six-year veteran of the Berkeley Police Department who was responding to a report of a theft, got out of his car to talk to two men at the gasoline station.

One of them pointed a loaded 9mm handgun at the officer, Belmar said.

Pulling out his own gun, the officer stepped backward, stumbled, and fired three shots. One of them struck the man with the gun, a second hit a police car tire, and the third cannot be accounted for, he said.

Paramedics declared the man dead at the scene.

Hoskins said he did not want to jump to conclusions, but also emphasized what he said were clear differences with the Brown case.

Maria Chappelle-Nadal, a black Missouri state senator who has been tear-gassed while protesting Brown’s death, said she believed the Berkeley police officer was justified.

“This is a different narrative in that he had a gun,” she told CNN, referring to the man who was killed.

Authorities did not identify the dead man, but the St. Louis Post-Dispatch named him as Antonio Martin, 18.

The authorities also did not identify the police officer, who has been put on administrative leave. Police are seeking the second man involved in the incident.

The officer had been given a body camera but was not wearing it at the time of the shooting, although Berkeley’s mayor said he was not fazed by this as the program was so new. The dashboard camera on the officer’s car was also off.

Protests in Ferguson have taken place for months and spilled over into violence when a grand jury decided a month ago not to charge the police officer who shot Brown.

Demonstrations in cities across the country gained in momentum when a New York grand jury decided not to indict a police officer over the death of Eric Garner, a 43-year-old black man who died in July when police tackled him and put him in a choke hold.

About 200 people marched in New York on Tuesday, defying Mayor Bill de Blasio’s call for protests to be suspended after two police officers were killed in their patrol car in Brooklyn on Saturday in an apparent act of retribution.

In Los Angeles, police said they would investigate whether any officers were involved in the singing of a song, at a party organized by a retired policeman, that poked fun at the Ferguson killing.