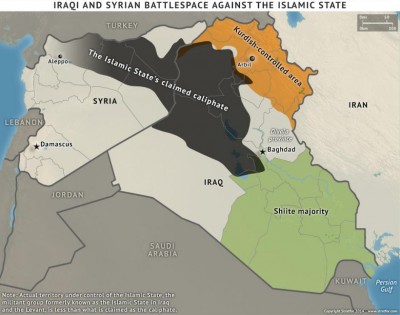 The Islamic State (Isis) has recruited an army hundreds of thousands strong, far larger than previous estimates by the CIA, according to a senior Kurdish leader.

He said the ability of ISIS to attack on many widely separated fronts in Iraq and Syria at the same time shows that the number of militant fighters is at least 200,000, seven or eight times bigger than foreign in intelligence estimates of up to 31,500 men.

Fuad Hussein, the chief of staff of the Kurdish President Massoud Barzani said in an exclusive interview with The Independent on Sunday that “I am talking about hundreds of thousands of fighters because they are able to mobilise Arab young men in the territory they have taken.”

He estimates that ISIS rules a third of Iraq and a third of Syria with a population of between 10 and 12 million living in an area of 250,000 square kilometres, larger than the size of Great Britain ( 230,000 Sq KM) . This gives the jihadis a large pool of potential recruits.

The Islamic State (Isis) has recruited an army hundreds of thousands strong, far larger than previous estimates by the CIA, according to a senior Kurdish leader. He said the ability of Isis to attack on many widely separated fronts in Iraq and Syria at the same time shows that the number of militant fighters is at least 200,000, seven or eight times bigger than foreign in intelligence estimates of up to 31,500 men.

Fuad Hussein, the chief of staff of the Kurdish President Massoud Barzani said in an exclusive interview with The Independent on Sunday that “I am talking about hundreds of thousands of fighters because they are able to mobilise Arab young men in the territory they have taken.”

He estimates that Isis rules a third of Iraq and a third of Syria with a population of between 10 and 12 million living in an area of 250,000 square kilometres, the same size as Great Britain. This gives the jihadis a large pool of potential recruits.

Proof that Isis has created a large field army at great speed is that it has been launching attacks against the Kurds in northern Iraq and the Iraqi army close to Baghdad at the same time as it is fighting in Syria. “They are fighting in Kobani,” said Mr Hussein. “In Kurdistan last month they were attacking in seven different places as well as in Ramadi [capital of Anbar province west of Baghdad] and Jalawla [an Arab-Kurdish town close to Iranian border]. It is impossible to talk of 20,000 men or so.”

The high figure for Isis’s combat strength is important because it underlines how difficult it will be eliminate Isis even with US air strikes. In September, the CIA produced an estimate of Isis numbers which calculated that the movement had between 20,000 and 31,500 fighters. The underestimate of the size of the force that Isis can deploy may explain why the US and other foreign governments have been repeatedly caught by surprise over the past five months as IS inflicted successive defeats on the Iraqi army, Syrian army, Syrian rebels and Kurdish peshmerga.

The US and its allies are beginning to take on board the obstacles to fulfilling President Obama’s pledge to degrade and destroy Isis. General Martin Dempsey, the chairman of the Joint Chiefs of Staff, arrived in Baghdad on Friday in a surprise visit. He said he wanted “to get a sense from our side about how our contribution is going”. Earlier in the week, he told Congress that to defeat Isis an efficient army of 80,000 men would be necessary. Few in Iraq believe that the regular army is up to the task, despite winning a success last week by retaking the refinery town of Baiji and lifting the siege of the refinery, the largest in Iraq.

In a wide-ranging interview, Mr Hussein spelled out the new balance of power in Iraq in the wake of the Islamic militants’ summer offensive and the military re-engagement of the US. The Kurdistan Regional Government now faces Isis units along a 650-mile front line cutting across northern Iraq between Iran and Syria. Mr Hussein said that the US air intervention had enabled the Kurds to hold out when the unexpected Isis assault in August defeated the peshmerga and came close to capturing the Kurdish capital Irbil: “They were fighting with a strategy of fear that affected the morale of everybody, including the peshmerga.”

As well as terrifying its opponents by publicising its own atrocities, Isis had developed an effective cocktail of tactics that includes suicide bombers, mines, snipers and use of US equipment captured from the Iraqi army such as Humvees, artillery and tanks. To combat them, Mr Hussein says the Kurds need Apache helicopters and heavy weapons such as tanks and artillery.

The Kurdish leaders are now much more relaxed about Isis because they have a US guarantee of their security. The grim experience of the US in seeing the collapse of the government and army in Baghdad, which the Americans had fostered at vast expense, also works in favour of the Kurds.

Mr Hussein does not like to talk about it today, but the Kurdistan Regional Government got a nasty surprise in August when it asked the Turkish government for help in stopping Isis only to be told Ankara planned no immediate assistance. It was only then that the Kurds turned to Iran and the US, both of which immediately acted to prevent a complete victory by the Islamic militants. Iran sent some officers, military units and artillery while the US started air strikes on 8 August.

Mr Hussein speculates that the CIA and US intelligence agencies may only have been speaking about “core” fighters in claiming that the jihadis had at most 31,500 men under arms. But the fighting over the past five months has shown that Isis has become a formidable military force. “We are talking about a state that has a military and ideological basis,” said Mr Hussein, “so that means they want everyone to learn how to use a rifle, but they also want everybody to have training in their ideology, in other words brainwashing.”

A sign of the military professionalism of Isis is the speed with which they learned to use captured US tanks, artillery and other heavy equipment captured after the fall of Mosul on 10 June. The same thing happened in Syria where Isis captured Russian-made arms which it rapidly started using. The most likely explanation for this is that IS’s ranks contain many former Iraqi and Syrian soldiers whose skills Isis has identified. Mr Hussein says that the peshmerga has been impressed during the fighting by Isis’s training and discipline.

“They will fight until death, and are dangerous because they are so well-trained,” said Mr Hussein. “For instance, they have the best snipers, but to be a good sniper you need not only training on how to shoot, but discipline in staying put for up to five hours so you can hit your target.”

There is supporting evidence for Mr Hussein’s high estimate for Isis numbers. A study by the National Security Adviser’s office in Baghdad before the Isis offensive showed that, when 100 jihadis entered a district, they would soon recruit between five and 10 times their original number. There are reports of many young men volunteering to fight for Isis when they were in the full flood of success in the summer. This enthusiasm may have ebbed since the US started air strikes and the Isis run of victories ended with their failure to capture Kobani in northern Syria despite a long siege.

In an impoverished region with few jobs, Isis pay of $400 (Â£250) a month is also attractive. Moreover, Mr Hussein says that in the places they have conquered Isis is remodelling society in its own image, aiming to educate people into accepting Isis ideology.

The Kurds have recovered their military self-confidence in the knowledge that they are backed by the US and Iran. The peshmerga have taken back some towns lost in August, notably Zumar close to the Syrian border, but not Tal Afar and Sinjar where 8,500 Yazidis are still besieged on their mountain top. But there are limits to how far the Kurds are willing to advance even if they succeed in doing so. Mr Hussein says that the Kurds can help an Iraqi army, supposing a non-sectarian one is created, but “the Kurds cannot liberate the Sunni Arab areas”.

This is the great problem facing a counter offensive against Isis by Baghdad or the Kurds: it will be seen by the five or six million Sunni Arabs in Iraq as directed against their whole community. Hitherto, the US has been hoping to repeat its success between 2006 and 2008 in turning many Sunni against al-Qaeda in Iraq. Mr Hussein ticks off the reasons why repeating this will be very difficult: the Americans then had 150,000 soldiers in Iraq to back up anti-al-Qaeda tribal leaders. Isis will savagely punish anybody who opposes it. “We have seen what happened in Anbar to the Albu Nimr tribe [that rose up against Isis]. They stood bravely against the terrorist but 500 were killed. It was a disaster.”

Overall, Mr Hussein says he does not see any convincing sign of resistance from the Sunni Arabs. Many of them may be unhappy, particularly in Mosul, but this is not translating into effective opposition. Nor is it clear what outside force could organise resistance. The Iraqi army might be acceptable in Sunni areas but only if it is reconstituted so that is not dominated by the Shia.

At the moment, the Kurds see little sign of its presence. They have been asking for regular troops to defend the Mosul Dam on the Euphrates so they can use up to 3,000 peshmerga stationed there, but no Iraqi troops have turned up. “Those who are now defending Baghdad are the army of the [Shia] parties. To re-establish a professional army needs time.”

Mr Hussein did not say so, but it may be too late to establish a competent cross-confessional regular army in Iraq. The counter-offensive by Baghdad is led by the three main Shia militias which have almost the same ideological fervour and sectarian hatred as Isis. Any advance on the battlefield leads to the population deemed loyal to the losing side taking flight so the whole of northern Iraq has become a land of refugees.