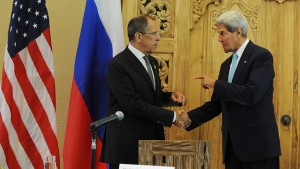 The United States and Russia have agreed to press the United Nations to set a date for a Syria peace conference sometime in the second week of November, U.S. Secretary of State John Kerry said on Monday after talks with his Russian counterpart.

“We will urge a date to be set as soon as possible,” Kerry told reporters at a joint news conference with Russian Foreign Minister Sergei Lavrov.

Kerry also said that the start of the destruction of chemical weapons in Syria was a “good beginning” and, in unusual praise for Damascus, said Syria’s government should be given credit for complying with a recent U.N. resolution to destroy its chemical weapons arsenal.

Kerry and Lavrov met at a resort on the sidelines of an Asia-Pacific summit in Bali, Indonesia, where they signed an agreement on nuclear risk reduction centers in Washington and Moscow, first created in 1987 to facilitate verification of arms control treaties and agreements.

Kerry and Lavrov met first with aides and then privately where they discussed ways to end Syria’s civil war and upcoming talks with Iran on ending a dispute over its nuclear weapons program.

Kerry characterized his meeting with Lavrov as “one of the most productive we have had”, saying they spoke at length about ways to bring warring parties in Syria together for talks in Geneva, known as Geneva 2.

“We agreed again there is no military solution here and we share an interest in not having radical extremists on either side assuming a greater position in Syria, and that is why we re-committed today very specific efforts to move the Geneva process as rapidly as possible,” Kerry said.

He said both sides would seek to “lay the groundwork for a round of talks.”

A team of international experts from the Organization for the Prohibition of Chemical Weapons in The Hague and personnel from the United Nations began destroying Syria’s chemical gas arsenal on Sunday.

It follows an agreement hammered out between Washington and Moscow after a deadly Aug 21 chemical weapons attack in the suburbs of Damascus, which prompted U.S. threats of air strikes against the Syrian government. The elimination of the chemical weapons is expected to continue until at least mid-2014.

More than 100,000 people have died in Syria’s conflict, which began in early 2011 with peaceful demonstrations seeking more democracy but deteriorated into a sectarian civil war.