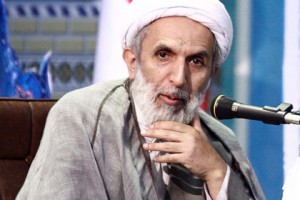 Mehdi Taeb , a Senior Iranian Shiite cleric offered the catchy headline in a speech yesterday to university student members of the Basij militia:

“Syria is the 35th province [of Iran] and a strategic province for us. If the enemy attacks us and wants to take either Syria or Khuzestan [in western Iran], the priority for us is to keep Syria….If we keep Syria, we can get Khuzestan back too, but if we lose Syria, we cannot keep Tehran.” Hojjat al-Islam Taeb, the head of the Ammar Strategic Base (an organization established to fight the “soft war” against the Islamic Republic of Iran) said

Khuzestan province provides 90 % of the Iranian oil . It is about 6.5 times the size of Lebanon and has a population of about 4. 5 million. The inhabitants of Khuzestan are usually referred to as Ahvazi or ( Ahwazi) Arabs . They speak Arabic but are not allowed to have Arabic language teaching schools .

Iran actually has 31 provinces, but Taeb may have considered each of the three UAE islands that were occupied by Iran as a province and that is how he may have come up with the number 35 after adding Syria.

Iran occupied in November 1971 the three UAE islands of Greater and Lesser Tunb and Abu Musa.

Taeb also pointed to the Islamic Republic’s support of Syrian militias through Iranian advisors inside the the country. He explained:

Syria had an army, but did not have the ability to manage a war inside Syria’s cities. It is for this reason the Iranian government suggested that, to manage an urban war you must form a Basij …The Syrian Basij was formed with 60,000 [members] of Hezbollah , who took over the war in the streets from the army.”

More important than Taeb’s rhetoric was the death inside Syria of one of those Iranian advisors, Revolutionary Guard commander Hossam Khoshnevis , also known as Hossein Shateri , the head of the Iranian Committee for the Reconstruction of Lebanon. The commander was killed near Zabadani close to the Lebanese border, as he returned to Beirut from Syria.

Shateri had been head of Iranian reconstruction efforts in Lebanon following the 2006 war with Israel. Before that, he had led Tehran’s projects in Afghanistan. Shateri was reportedly a top Missile expert.

The exact circumstances of Shateri’s death remain a mystery . Iranian officials initially said that he had died on Tuesday, but Tehran’s declarations that he was killed by “Israeli agents” and the location of his demise led to speculation that he had been killed on 28 January when Israel’s jets attacked a convoy carrying military equipment from Syria to Lebanon.