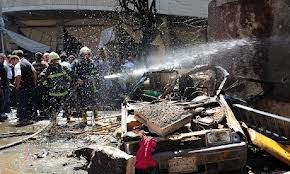 Damascus – For months, most of Syria’s minority sects stood warily on the sidelines of the revolt by the Sunni Muslim majority against President Bashar al-Assad’s Alawite-dominated rule.

But in Damascus, neighborhood vigilante groups are arming themselves in Christian, Druze and Shi’ite Muslim areas, throwing up sectarian borders across Syria’s capital in alliance with Assad’s forces.

“We protect our area from terrorists. We check all the cars coming in, and anyone we’re suspicious of,” says Sameer, 32, one of four men with rifles sipping tea under a stone archway in the Christian quarter of the historic old city.

By “terrorists” Sameer, a cab driver with the Virgin Mary and a cross tattooed on his arms, means the mostly Sunni rebels who have fallen back to an arc of suburbs on the eastern outskirts after fierce battles with Assad’s forces in July.

Residents fear that far from protecting them, the self-styled popular committees have merely made them targets.

“It’s not a matter of whether they become militias. They are militias already,” said a 20-year-old who lives in the old city.

Unwilling to be identified, he pointed to the scowling young men gathered around the candy and newspaper stands that dot almost every alley and street corner.

Residents say they are secret outposts for the committees – “lijan shaabiya” in Arabic, called “lijan” for short.

Larger checkpoints manned by young gunmen, sometimes teenagers, stand outside most districts home to minority sects, which had earlier been reluctant to offer more than tacit acceptance of Assad’s rule.

“Security forces are arming the minorities,” said the young resident. “They are preparing for a sectarian war.”

Damascus is not the first city to see the lijan phenomenon. The pro-Assad “shabbiha” militias, which the opposition accuse of massacring Sunnis, grew out of neighborhood watch groups in other cities like Homs and Aleppo. They eventually began roaming provinces with security forces, joining raids and looting homes.

Shabbiha have so far been made up mostly of the Alawite minority, an offshoot of Shi’ite Islam, whose members fear bloody retribution should the 17-month-old uprising succeed.

Residents say lijan from other minorities are now carrying out extra-judicial executions, creating a cycle of revenge killings in a conflict that has killed 20,000 people already.

The dangers are all too clear for Syria, whose neighbors Iraq and Lebanon have both been torn by sectarian conflicts that killed not tens but hundreds of thousands of people.

The Druze district of Jaramana has become a cautionary tale of what residents in other parts of Damascus want to avoid.

Amr, a young dentist, remembers the night several weeks ago when a volley of gunfire in the neighborhood woke him up. Gunshots, he sighs, are now common, but this was not.

“Security forces had brought in some guy from Ain Tarma, a Sunni suburb. They didn’t take him to the police. They took him to the lijan. They told the guys this man killed a Druze family in Jaramana. So what did the lijan do? They dragged him to the main square. They sprayed his body full of bullets,” Amr said.

His pale blue eyes stared blankly ahead: “Later, we heard the guy was just an activist.”

Now Jaramana has become a sectarian target. The activist’s death lead to a suspected rebel drive-by shooting that killed four Druze and two Christian lijan members. Two car bombs hit the district in one week, no one knows who was behind them.

Every few days, a Druze cleric can be heard driving through the streets, calling people to join the latest “martyr” funeral. Chanting crowds carrying a white shrouded corpse march past.

Many Damascenes place their faith in community leaders to soothe tensions between neighborhoods.

Others say official involvement in the lijan means it may be too late, saying their members got weapons permits from the security forces and in some cases weapons from police.

“Security forces created the lijan,” says a Druze resident of Jaramana, who goes by the name Nader. The 23-year old is secretly sympathetic to the opposition, even though his family supports Assad and some of them work for the security forces.

“They say the lijan help us protect ourselves, but really they just wanted to light the sectarian fuse in Damascus.”

For Amr, the dentist, the lijan are a source of fear. “They are thugs, pure and simple,” he said. “These guys are above the law.”

Lijan members say their communities are at risk as Syria slides into an increasingly militarized conflict.

“If the army doesn’t call me for reserve duty, I may volunteer. My brother was a soldier. The rebels in Homs killed him. These people are radical Islamist terrorists,” says Wael, a 33-year-old Druze carpenter sitting at a crossroads behind a rickety desk which serves as a checkpoint.

He was echoing Assad, who argues that the uprising, which grew from peaceful protests, is a foreign-backed “terrorist” movement.

The opposition disavows radicalism, but minority fears are exacerbated by rising sectarian tensions and growing support for the rebels from Sunni Islamist groups in the Gulf.

In a Shi’ite part of Damascus’s old city, Hassan, a chubby 26-year-old in flip flops, patrols a street that leads to the Sunni neighborhood nearby.

“They’re well-armed over there, thanks to the Gulf. We’re afraid they will penetrate our area. They want to break into our homes,” he says, wiping sweat off his shaved head.

“A few days ago we had a gunfight, three of our guys were wounded. We called security forces to back us up. But they never came. This just goes to show, we need to defend ourselves.”

Down the street, a Sunni cab driver complained about his Shi’ite neighbors. “They attack our houses and steal things,” he said. “We won’t let those Shi’ites take our land, we will defend our honor.”

Opposition factions share some of the blame for stoking the sectarian fire.

As explosions and gun battles rocked Damascus in July, some residents were panicked by reports circulated by activists that Alawite and Christian men were storming Sunni neighborhoods, butchering people in the streets with knives.

No evidence ever materialized to back their claims.

Later on, residents of Alawite and Christian neighborhoods said they had heard similar rumors, except they were told Sunni rebels were coming to kill them.

Rumors have a way of becoming reality. Two months on, sectarian kidnappings have become common, and sometimes end with mutilated bodies being dumped in the street.

“That’s the thing that really scares you right now, wherever you live. You’re afraid to drive around at night. People get taken for ransom, to trade for other hostages,” said Rula, 30, a Sunni resident of Damascus.

Like most Damascenes, she is convinced the kidnappings are a vicious circle perpetuated by the lijan, the rebels, and the secret police. “What distinguishes them is just a title, I honestly don’t see them as any different.”

Soldiers in the city often wear T-shirts or casual clothing now, just like the lijan, and residents say they take turns to man many of the checkpoints.

What makes the lijan stand out is their aggressive questioning of people entering a neighborhood, says Ayman, a student in Damascus. “They make you feel you’re on their turf.”

But the line between the vigilantes and the official security forces seems increasingly blurred.

“One night, I was driving to Jaramana with friends. It was dark,” said Ayman, adding that residents told him rebels had infiltrated the area.

“Gunmen were searching the streets. We watched them for a while, and I realized something: I couldn’t tell which of them were the soldiers, and which were the lijan. Now, it is impossible to know.”

(This story was reported for Reuters by an independent journalist, whose name is withheld for security reasons)