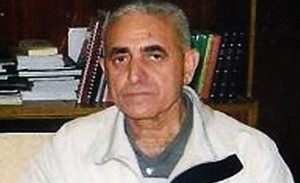 The head of Syria’s air force intelligence has been assassinated in his Damascus office by one of his aides, Syrian opposition sources told Al Arabiya Sunday.

Lieutenant Jamil Hassan was killed on Saturday in his office by an aid who worked with the Ahfad al-Rasul, or Grandchildren of the Prophet Brigade, sources affiliated with the opposition Free Syrian Army (FSA) said.

The air force intelligence chief was targeted as rebel groups within the country have been pounded from the skies by pilots loyal to Syrian President Bahar al-Assad’s regime.

Hassan, an Allawite from Homs, is reportedly considered one of Assad’s closest advisors.

The FSA has been calling for outside support and weapons to fight attack helicopters, jets and tanks. But in their scramble for stronger armaments, a resistance battalion in the southern border city of Deraa claimed to Al Arabiya Sunday that it now manufactures its own small rockets to launch at pro-Assad forces.

The rebels from Al-Mutassim Bilah Battalion said they had named their small rockets Abu al-Heej, and had also established a workshop to repair weapons captured from government troops.

The claims came on the heels of other reported gains, as opposition sources old Al Arabiya on Saturday that the commander of the seventh division in the Syrian army, Brigadier General Mohamed Musa al-Khayrat, has defected to Jordan.

Khayrat, who left to Jordan along with eight members of his family and reportedly arrived in Jordan on Friday, is considered to be the second brigadier general to defect. The Free Syrian Army claimed Khayrat was among 19 other military defectors to arrive in Jordan on Friday.

Head of the Field Artillery Army Corps 1, Lieutenant Samir Jumaa, Pilot Colonel Nidhal Ghazawi, and Colonel Samir Ghazzawi from the army’s reinforcement section were among the other military defectors, the FSA said. The resistance group claimed that it had secured the crossing of 49 Syrian military officers into Jordan in the past three days.

Samih al-Muattiya, spokesman of the Jordanian government, said that his country is witnessing almost a daily intake of hundreds of refugees, including defected military men.

However, Muattiya said that military defectors had been entering through the border fence individually, and not as whole military units, as has been claimed by Syrian opposition members.

Opposition members said that around 1,000 Syrian military defectors, including two brigadier generals and about 150 colonels and lieutenants have left the conflict for Jordan, however those figures were not confirmed by the Jordanian government.

As in the case of all previous assassinations and defections the pro-government media denied that the assassination took place . Syrian TV channel, al-Dunya, which is state owned denied on Sunday that Hassan had been assassinated.

“The information about the assassination of Syria’s air force intelligence chief Jamil Hassan… is absolutely false,” the channel said.